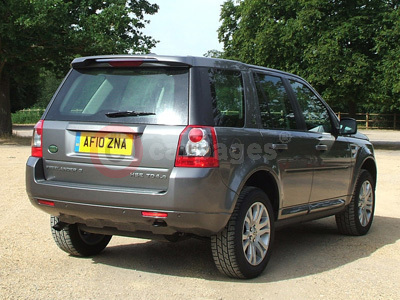 As the Land Rover Freelander 2 TD4_e will stop and start far more than a standard Land Rover Freelander 2, some of the components have been 'beefed up'. The starter motor, for instance is calculated to get the engine going up to three times more often in its lifetime, than the standard car. So, in order to compensate for the extra work, it has been given hard-wearing materials such as copper-tungsten contacts.

The battery too has a hard life and has undergone some changes to allow it to withstand the extra usage. Should the on-board battery monitoring system detect that the battery is running low, for some reason, the Stop/Start system will drop out and a more normal service resumed until it has recharged.

On the subject of normal service, the Land Rover Freelander 2 TD4_e is no different to its predecessor - apart from the obvious economies, that is. Under the bonnet is a 2.2-litre turbo-diesel engine, the same as in the automatic TD4. It produces the same 160PS at 4000rpm and no less than 400NM of torque at 2000rpm, which is why it is so good for towing and off-roading.

It has a top speed of 112mph and it takes 11.7seconds to get from 0-62mph, which is not bad at all. Under normal driving conditions the best of the oomph is to be found when the car is in the third of the six forward gears and I can vouch for the fact that it is quite happy to cruise at motorway speeds all day long.

The Land Rover Freelander 2 has a full-time 4WD system with a Haldex rear differential so it will easily cope with snow and slippery surfaces. And for those who like to venture into the unknown, the off-road credentials read as follows: ground clearance of 210mm, an approach angle of 31-degrees and a departure angle of 34-degrees. This latter is reduced to 19-degrees when there is a towbar fitted. Should the need arise, the Land Rover Freelander can wade through water at depths of up to 500mm.