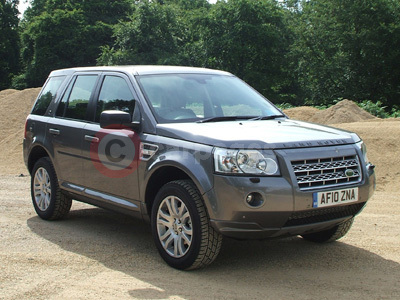 We tend not to associate Land Rover with economy. In fact it is safe to say that they are widely considered to be gas-guzzlers - especially the Range Rover.

However, in an effort to change that preconception and do its bit for the planet, Land Rover has introduced the Freelander 2 TD4_e as part of the Jaguar and Land Rover, £800 million investment in sustainable technologies, which includes plans for a hybrid version sometime in the future.

Back in the here and now, the main difference between the new Land Rover Freelander 2 TD4_e and the older model is the 'e', which represents Stop/Start technology.

This is the first time that the intelligent Stop/Start system has been used by Land Rover and, it's claimed, the Land Rover Freelander 2 is the world's first SUV to feature the technology and it is also the first production car to include e_TERRAIN TECHNOLOGIES - Land Rover's programme of sustainable engineering initiatives.

Does it make a difference? Well, yes! Apart from the obvious sentiment that the company wouldn't have bothered otherwise, we are told that during the Standard EU4 cycle, CO2 emissions are reduced by 8 per cent, compared to the previous model. Furthermore, Land Rover's own test showed that there was a reduction in fuel consumption of almost 20 per cent during heavy traffic, town driving. In real terms 8 per cent is the difference between 194- and the new 179g/km emissions along with an extra 4.5mpg. So, the economy figures now read as 33.2mpg for the urban cycle, 49.6mpg for the extra-urban and the combined is 42.2mpg.

In order to help the driver achieve these target figures, there is a new gearshift indicator light that provides a visual prompt to change gear at the optimum times, for a cleaner, more fuel-efficient drive. Even if you ignore the suggestion most of the time, the increased economy is still noticeable and, I would go as far as to say, impressive, considering the Land Rover Freelander 2 TD4_e has lost none of the off-road prowess that has made it so popular.

The Stop/Start system is triggered automatically as soon as the key fob is pushed into its slot and the start button is pressed, but it can be deactivated via a button on the dash. Like most other similar systems, the engine only cuts out when the Land Rover Freelander 2 is completely stationary, the gearshift is in neutral and the clutch pedal is up. As soon as it is depressed, the engine fires up ready for the off.

If stopped for a while in hot weather, the system will start the engine occasionally, in order to keep the air-conditioning going and the cabin, cool. For those who are not used to it, the engine suddenly stopping can be a little disconcerting and it should be remembered that the power steering is also switched off just as it would be when parked.