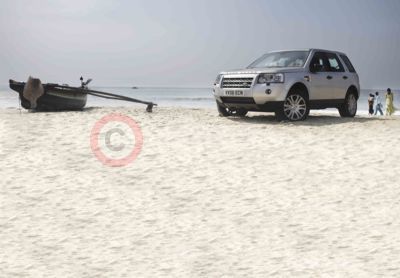 Land Rover's Freelander 2 has been crowned 'SUV of the Year' by BBC Top Gear at the magazine's annual awards celebration hosted by Jeremy Clarkson.

First unveiled at the British International Motor Show in London earlier this year, the Freelander 2 is on sale this month, and already, 1,500 of the new models have been sold.

With 14 editions of Top Gear magazine now being published in 14 countries around the world - editions were launched in India, China, Greece and across central Europe over the last 12 months - this award marks the Freelander 2's first international accolade.

Top Gear magazine editor, Michael Harvey, said: "We took the Freelander 2 to India for our awards photo shoot, and it was driven from Mumbai to Goa and back again in four days.  It performed faultlessly, carrying the Top Gear team and a pile of photographic equipment through 2,000km of the busiest, roughest and most dangerous roads on Earth."

He added: "If you need to go on a road trip with a load of baggage and people, and want to do it comfortably, safely and in style, then in the compact SUV sector, the Freelander 2 is the only choice."

Land Rover's managing director, Phil Popham, said: "The Top Gear team is arguably the most influential group of motoring journalists in the world, and their global reach is growing all the time, so to win their award in the most competitive of SUV sectors is an outstanding accolade and a great start for the Freelander 2."

The Freelander 2 is on-sale now at Land Rover dealerships throughout the UK, priced from £20,935 to £33,990, including a Climate Care contribution to off-set carbon emissions for 45,000 miles.