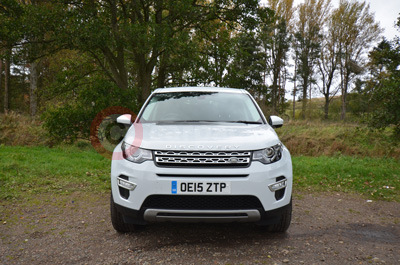 The Land Rover Discovery Sport made its UK debut in 2014, as the replacement for the long standing Freelander model.

We tested the Land Rover Discovery Sport HSE Luxury powered by a 2.0-litre 180hp diesel engine mated to a 9-speed automatic gearbox which at the time of testing was priced at £43,000 plus extras, finished in Yulong White with an Ebony Interior.

The Land Rover Discovery Sport is available with a four cylinder 2.0-litre diesel engine producing either 150HP or 180HP. It is available with the option of a six-speed manual gearbox or nine-speed automatic transmission, the latter in our opinion being the better option.

On the open road the Discovery Sport makes good progress and feels fast enough - there seems less lag than in the F-Pace we tested the week before which was fitted with the same engine but has an 8-speed transmission instead of the 9-speed fitted to the Sport. The gearbox is excellent, offering pretty much seamless changes, you can shift with the paddles on the steering wheel should the fancy take you and there is a sports shift option selected via the pop-up gear selector.

Land Rover quotes official NEDC fuel consumption figures on the urban cycle: 44.8 mpg, extra urban: 60.1 mpg and 53.3 mpg on the combined cycle with CO2 emissions of 139 g/km. These figures like every other manufacturer are optimistic as testing is done in a laboratory and they will not match real world consumption which is subject to driving style, the environment and load. On our mixed 500-mile test route, we were achieving approximately 39.6 mpg which increased to around the mid-40s mpg on the motorway, with a fully laden car.

One thing that we found annoying was the intrusive auto stop/start technology - which despite switching it off - always at some point during the day came back on - what we did not like about it is that it is trigger happy and if you hesitate for a second at lets say a road junction, off the engine, goes - especially as you are just about to pull out into traffic - and even when moving between drive and reverse when parking. Of course for longer stops in queuing traffic or at rest at the lights then perhaps we can see the benefits.

The Discovery Sport handles well although it is nowhere as good as the F-Pace, but it is good, with body roll well under control, we doubt many will complain. It does feel more nimble around town than the F-Pace - with more get up and go making it more relaxing to drive. It rides better, even with both cars sitting on 20” wheels. It also scores highly as it has some off road capability, where it does not feature a low ratio gearbox or locking differentials it does have reasonable ground clearance and terrain response. Terrain Response controls the transmission, ESP and braking system depending on the off road conditions, there is also hill hold descent - we’d have liked to have seen the feature that is on the F-Pace that allows you to control the car at low speeds by using the cruise control function - i.e. it can gently pull off without the use of the accelerator which is great on ice or difficult terrain. If you need the off road statistics - then the approach angle is 25 degrees, departure angle 31 degrees, ramp break over angle 21 degrees with a wading depth of 600mm.

In summary, there is nothing to dislike and a lot to like - perhaps if being a little picky there is some unwanted road noise and we would like to see nearer to 50 mpg - but overall it is rather good.

This is a 6-year+ news article, from our Land Rover archive, which dates back to the year 2000.

If in doubt check with your local Land Rover dealer as car prices and technical data will have changed since 2016.

Land Rover Discovery Sport Images may not be UK specification cars. Colours and exterior and/or interior elements may differ from actual models.