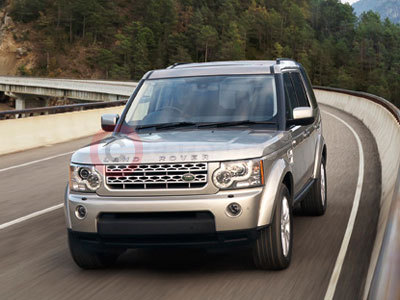 The new, fourth generation of Land Rover's supremely versatile seven-seat vehicle gains a new name - Discovery 4 - to go with its powerful and highly efficient new TDV6 diesel engine, fresh exterior identity and more premium cabin. The class-leading breadth of capability is extended even further with dynamic improvements for both road and off-road driving, and Land Rover has added a battery of user-friendly new technologies and features.

Star billing on the Land Rover Discovery 4 goes to the highly efficient and refined new LR-TDV6 3.0 twin turbo diesel engine. This delivers a 9 per cent fuel economy improvement (EU combined cycle) and ten per cent less CO2 emissions, at the same time as increasing power by 29%, all compared with the existing 2.7-litre engine. Torque increases even more, up 36% to 600Nm - believed to be the highest torque output of any 6-cylinder, production diesel, passenger vehicle engine in the world.

The Land Rover Discovery 4's power and torque are both accessible across the entire rev range, to deliver immediate throttle response and effortless cruising ability. The results include a 0-60mph time of 9.0 seconds, (0-100 km/h in 9.6 seconds), a 24 per cent improvement over the 2.7-litre.

Land Rover's engineers have also transformed the on-road ride and handling for the new generation Discovery 4, and even improved on the near-legendary off-road capabilities of its predecessor. The comprehensive changes include new suspension components, revised steering, larger brakes, improved traction control, and enhancements to the award winning Terrain Response system, which helps optimise the vehicle for virtually all on-road or off-road driving situations.

The iconic exterior design of the Land Rover Discovery 4 has been updated, most obviously with smoother and simpler surfaces at the front, including a new, more aerodynamic bumper. The sportier new lights help give the vehicle new character, and include LED technology front and rear. The sophisticated new front headlights include High Beam Assist, switching on or off, as conditions require.

The Land Rover Discovery 4's interior is completely redesigned, with a transformed dash and centre console, new seats and an array of new, user friendly features.

The new engine has been optimised for low-end torque as well as economy, making it possible to activate the lock-up clutch of the ZF HP-28 automatic transmission at lower speed. This reduces 'slip' in the hydraulic torque converter improving both fuel consumption and CO2 emissions. The higher torque at lower rpm also enables longer gearing for more economical cruising.

The Land Rover Discovery 4 incorporates several other energy saving features too. At standstill, the idle speed of the V6 has been reduced from 750rpm to 710rpm, giving a fuel saving without compromising refinement. An Intelligent Power Management System includes Smart Regenerative Charging, so whenever possible the alternator charges the battery when it is most economical to do so, such as when the car is coasting rather than accelerating.

The new air conditioning pump is driven through a clutch which disengages when the air conditioning is not in use reducing parasitic losses and delivering improvements in fuel consumption and CO2 emissions.