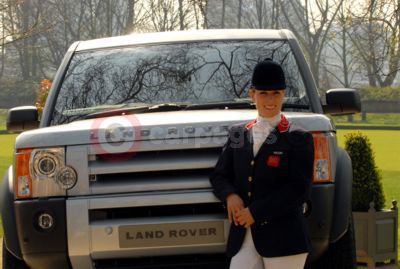 Land Rover is proud to announce today its support of British Three-Day Eventing as 'The Official Vehicle to the British Eventing Team'.

This represents the next stage of Land Rover's growing association with one of the most successful sports in the UK.  Land Rover is title sponsor to The Land Rover Burghley Horse Trials and also a long-term supporter of world champion Zara Phillips - the face of a Land Rover UK advertising campaign.

Miss Phillips commented: "There is a natural fit between Land Rover and equestrian sports. I am delighted to have their support not only of my own career but also for the team. This will no-doubt help in the British Team's preparation to achieve success at the forthcoming European Championships in Italy and beyond."

The Discovery 3 is already a British success story, having now won more than 95 awards around the globe including 'What Car? Car of the Year' and the BBC Top Gear 'Best SUV'.  It also holds Guinness Book of Records recognition as the most-awarded vehicle ever.

The company's long-term commitment to equestrian sports goes back to 1980 when Land Rover supported training sessions and bursaries for young riders, created and run by Captain Mark Phillips and branded the ‘Range Rover Team’. Land Rover continues as official vehicle supplier to a number of equestrian events including The Royal Windsor Horse Show, Bramham International Horse Trials and The Festival of British Eventing at Gatcombe Park.

Look out for the British Eventing team members at The Land Rover Burghley Horse Trials - 30 August to 2 September 2007.