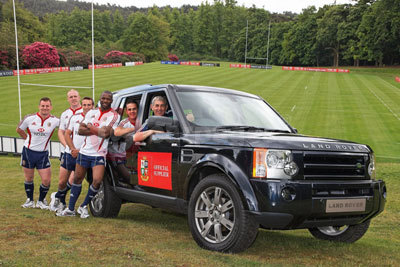 Through the agreement, the British & Irish Lions will benefit from the provision of a fleet of Land Rover's supremely capable Discovery 3 vehicles for use during the UK-based preparations and throughout the two months of the Tour in South Africa. The vehicles will provide an essential role transporting the players, support staff and kit in comfort.

John Feehan, Chief Executive, British & Irish Lions, commented on the deal, "We are delighted to have this support from Land Rover. Acquiring the backing of such a reputable supplier, that will be an undoubted asset to the squad and our Tour, has been very important to us."

Land Rover has a long established relationship with the British & Irish Lions team, providing vehicles for both the 2001 and 2005 Tours to Australia and New Zealand respectively. Land Rover's continued sponsorship reinforces its commitment to the game of rugby.

"We are extremely pleased to be supporting the team yet again throughout this exciting tour both in the UK and in South Africa," comments Phil Popham, Land Rover managing director. "Our commitment to rugby now covers all levels of the game, from supporting the elite of the British & Irish Lions team to the young players of the future. There is a natural synergy with the sport that reflects our brand's 'Go Beyond' spirit. We wish the team the best of luck in South Africa and hope that they come back victorious."

Land Rover's existing support of the sport encompasses the international, domestic and grassroots elements of the game. It is the Official Vehicle of England Rugby and Premier Rugby as well as the sponsor of a new U11 and U12's national tournament, The Land Rover Premiership Cup.