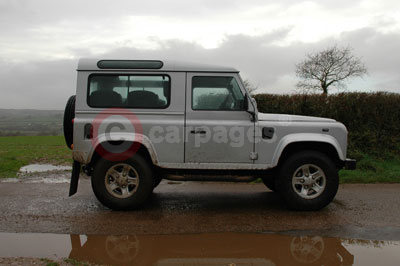 The phenomenon that is Land Rover began in 1948 when the Series I was released with the advertising slogan the 'go anywhere' vehicle. Fifty-Seven years later, what began as a post war project to keep the Rover Car Company afloat has developed into a British motoring legend and over two-thirds of Land Rover's sold in the last half century are still in use today.

Now known as the Defender, Land Rover's iconic off-road vehicle is the benchmark for all modern four-wheel-drives and is often described as the 'hero' of the Land Rover range. Often seen as the vehicle of choice for expeditions and adventures including Lara Croft's transport in the Tomb Raider films which proved so popular that Land Rover introduced a limited edition 'Tomb Raider' model. When Sir Ranulph Fiennes embarked on an epic around-the-world trip it was a Land Rover Defender that he chose to rely on.

Available with a choice of three wheelbase lengths - 90, 110 and 130 the Defender offers a range of body-styles. The 90 and 110 are available as a pick-up, hardtop and station wagon whilst the 110 is also available as a double cab and the 130 as a crew cab. Defenders can also be converted or adapted to fulfil more unusual roles such as fire tenders, ambulances and fitted with protective bodywork for peace keeping duties.

We test whether the Defender has lagged behind its contemporaries or if it is as Land Rover describe it 'peerless'.