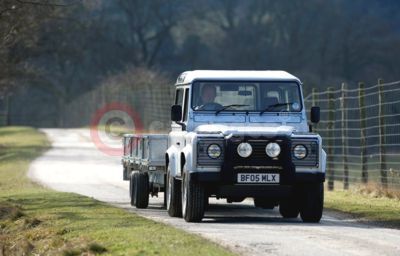 Customer demand for the iconic Defender will see Land Rover release details of a new model for 2007 later this year, including a series of significant upgrades to enhance the ownership experience and meet forthcoming legislation. It starts going on sale next spring and will help ensure that the Defender remains in production until at least 2010.

The extension to the long life of Defender, which has been in production in various models since 1948, will preserve more than 750 jobs at the Solihull factory where it is produced alongside the Range Rover, Range Rover Sport and Discovery 3. Work is also underway to see if there are opportunities to extend Defender's life beyond 2010.

Annual production of Defender has remained consistent at around 25,000 units in recent years, with much of the demand coming from large contract orders. For example, the Italian energy distribution company, Ente Nazionale Elettricita, recently placed an order for over 900 Defenders.

Since its emergence, nearly 60 years ago, the original Land Rover has carved a heroic path through some of the world's remotest regions and at one time for 60% of the planet's population a Land Rover was the first motorised vehicle they had seen.

"With sales growth forecast in 2006, Defender remains a significant contributor to the business as well as an enduring symbol of Land Rover's 4x4 heritage," said Phil Popham, Land Rover's Managing Director. "Its simple concept hasn't changed fundamentally over the years, but it remains as relevant as ever.

Defender continues to play a vital role for emergency services, aid workers and farmers around the world. As we grow Land Rover we're not forgetting our core values and our traditional customers."

With a rugged ladder-frame box-section chassis and aluminium bodywork, the Defender is incredibly tough. Its practical advantages include its unmatched combination of off-road supremacy, carrying capacity and towing capability.

The Defender name was introduced in 1990 but the model is a direct descendant of the original Land Rover introduced in 1948. Production of Defender and its predecessors has passed 1.8 million and it is estimated that over two thirds of them are still in use.