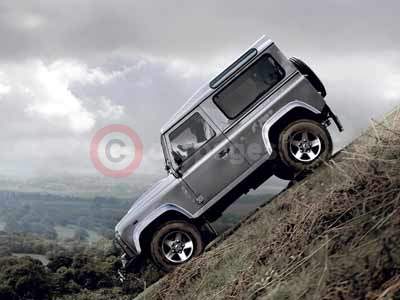 The 2012 Land Rover Defender will features a new EU5 2.2 litre diesel engine, which will replace the EU4 2.4 litre diesel engine, offering improved performance and levels of refinement whilst delivering the same power, torque and economy. The new engine is the cleanest engine to feature in a Land Rover Defender, in EU5 markets it will feature a diesel particulate filter (DPF) ensuring the lowest levels of regulated emissions.

A new plain black Pick Up hood is now available as an option, in response to customer feedback and a plain beige hood will be introduced for the 110 Double Cab Pick Up, both of which are available alongside existing styles. Tinted glass is also available on all Land Rover Defender models.

Tall front seats have been designed to improve back support and head restraint. The Land Rover Defender 110 Station Wagon and 140 Crew Cab models accommodate three occupants, with an asymmetrically-split second row seat. The seats can be folded using a spring assisted fold mechanism for when carrying large loads.

The Land Rover Defender 90 Station Wagon features individual, full size rear seats for second row occupants, offering high levels of comfort, the seats are also an option as a third row for the 110 Station Wagon model, accessible either via the rear door of by folding the second tow seats. When not in use, they can be folded and stowed sideways in the loadspace.

The Land Rover Defender seats are trimmed in all-vinyl and cloth specifications, with a half-leather option which is included in the XS specification on the Station Wagon and 110 Double Cab Pick Up.

In total, 14 separate body styles are available for the 2012 Land Rover Defender, including pick ups and soft tops, crew cabs and station wagons.