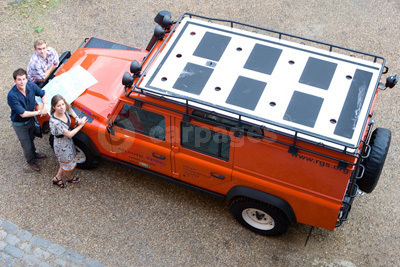 A team of three Cambridge graduates has received a Land Rover Defender 110 and a cheque for £10,000, at the Royal Geographical Society (with IBG) in London, to embark on an expedition of approximately 32,000km, through 31 countries, to raise awareness of the potential impacts of climate change along the Atlantic coastline.

'Atlantic Rising', winners of the 2009 'Go Beyond' Bursary, which was awarded by the RGS-IBG and Land Rover earlier this year, will navigate land around the Atlantic Ocean by attempting to follow the 1m contour line which scientists forecast could become the new coastline in 100 years.

Tim Bromfield, Lynn Morris, and Will Lorimer, will follow the 1m contour line around the Atlantic as closely as possible, visiting schools and creating an educational network with up to 10,000 students along the route. They will report from some of the remotest coastal regions of the Atlantic Ocean and establish a sea-level change education project that can be used in 1,200 schools throughout the world via the online schools network.

Tim Bromfield from Atlantic Rising said, "Education is the most powerful weapon we have to combat climate change. By encouraging students around the Atlantic to work together, we want to highlight our shared responsibility in dealing with this critical issue. By encouraging international friendships, we hope to make people care enough to act."

Dr Rita Gardner, Director of the Royal Geographical Society (with IBG), said, "This project, made possible through our partnership with Land Rover, focuses on one of the most challenging issues we face - the potential impacts of climate change in coastal regions. As recipients of the Bursary, Atlantic Rising have been granted the opportunity to 'go beyond' their normal limits and boundaries and at the same time support one of the Society's objectives which is to promote the wider understanding and enjoyment of geography."

This is the second 'Go Beyond' Bursary run by RGS-IBG on behalf of Land Rover, whose partnership with the Society has existed for more than 20 years.

Land Rover holds sustainability at the core of its business activity, including sponsoring conservation partners such as RGS-IBG. Together with sister company, Jaguar, Land Rover is investing £800m in sustainable technology which includes the development of hybrid technology and the use of lightweight material. As part of Land Rover's commitment to sustainability, the manufacturing and mileage of the Land Rover Defender 110 vehicle are being carbon offset through ClimateCare who run Land Rover's CO2 Offset Programme in the UK, France, The Netherlands, Belgium, Norway, Sweden, Austria and other international markets.