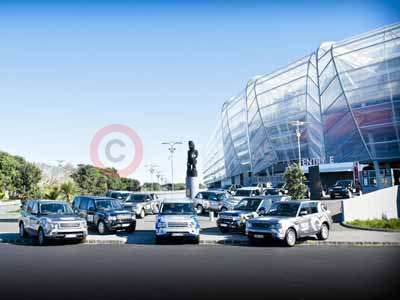 30 Land Rover vehicles including Range Rover Sports and Land Rover Discoverys, have been provided to organisers and officials and will be used throughout the Tournament by RWCL and RNZ 2011. The vehicles feature special RWC 2011 branding, number plates and commemorative badging to celebrate the association throughout New Zealand.

The Land Rover fleet was presented to Kit McConnell, RWC 2011 Tournament Director at Eden Park, where the first game will be hosted on 9th September 2011. He said: "Rugby World Cup Limited is delighted to have a long term partnership with the globally renowned Land Rover brand.

"The provision of the Official Vehicles by Land Rover is key to the successful running of Rugby World Cup 2011 and will be put to good use to ensure that the Tournament is run smoothly over the next few months."

James Yates, Group General Manager, Land Rover New Zealand added, "We are extremely proud to be supporting Rugby World Cup 2011 this year in New Zealand by providing a fleet of vehicles to help with the organisation of the Tournament. These special vehicles will be on sale to the general public once the Tournament has finished in November."

Land Rover is also Primary Sponsor of the Official RWC 2011 App, providing fans with up to date Tournament information. The app is expected to downloaded more than one million times.

Yates continued, "Rugby fans from all nations will be able to get exclusive Rugby insight from Land Rover Rugby ambassadors via the Official RWC 2011 App. Land Rover is giving Rugby fans the opportunity to engage directly with current and former Rugby players through 'Tackle the Pros'. This feature will allow fans to upload their own questions and Land Rover will then put these to the Rugby experts".

The free app will be available for BlackBerry, PlayBook, iPhone, iPad, Android, and Windows Phone 7, available in English, French and Spanish, offering the following features: