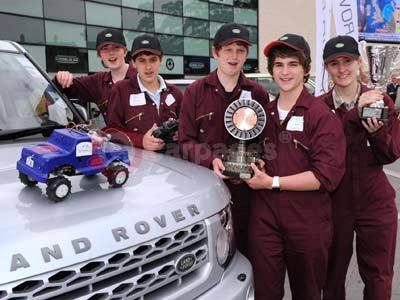 Team Alpha, a group of students from Queen Elizabeth's Grammar School in Horncastle, Lincolnshire have won the 4x4 in Schools Technology Challenge National Finals, supported by Land Rover and IET with their remote control vehicle design.

Team Manager of Team Alpha, Freddie Payne, 16, said: "We are over the moon. We won our age category last year, but really didn't expect to win the whole thing because there were so many good cars. We started working on our car last October, so it's been nearly a year-long project. All our hard work as paid off though so it has all been worth it.

"I think one of the main features which helped us win was the four wheel steering. It was really difficult to design this and it took us nearly two months to crack it, but we got it to work and that was a great achievement. The whole project became a bit of an obsession for us; we put in loads of hours, not just in building the car but all the other elements too, with the verbal presentation and display that you have to do. Winning today has been brilliant and we have had a great time competing in this Challenge."

To reach the finals, the team had to battle against other local school teams at the Central Regional Finals where they won overall and collected the Best Engineered Car award, after which they travelled to Coventry for the National Finals.

The team faced driving the 4x4 around a course of obstacles as well as a verbal presentation to a team of judges, producing a graphic display of work and scrutineering of the model vehicle the teams had to excel in a number of disciplines.

Les Ratcliffe, Head of Community Relations for Jaguar Land Rover and Head of the judging panel said: "The work put into the teams' entries was fantastic. The 4x4 in Schools Technology Challenge is designed to emulate how engineers work in industry, with team work being very important, as well as communicating the processes undertaken in a project. The engineering element of the programme is at its core and the students demonstrated a depth of understanding which goes way beyond their years; these teams should be very proud of their achievements."

David Lakin, National Project Manager, 4x4 in Schools, adds, "We've had great feedback from students and teachers who appreciate the opportunity to have a go at putting their school work into practice in a challenging way and one which is good fun. The students not only learn about engineering principles and the core education subjects of science, technology, engineering and maths, but they also improve their social skills and communication techniques, which are so valuable as they move into higher education, apprenticeships and the workplace."

Second overall and winners of the Best Engineered Vehicle award were Grip 2 from Castleford Academy. Team 3 - students from Richard Hale School in Hertford were third overall in the Challenge, also winning Best Winch Test Award. Manic Mechanics from Isle of Wight Learning Zone, Wootton Creak, Isle of Wight were awarded 1st Place in the Class 2 category and presented with the award for Best Rookie Team. Rock Runners from The King's School, Worcester, won the Innovation and Creative Thinking award and Best Track Performance was won by 'Rock Climbers', a team from JCB Academy, Rocester, Staffordshire.

Team Alpha collected the 4x4 in Schools National Champions trophy and were also presented with a £1000 university scholarship award to Harper Adams College, Shropshire for one of the team members.

The engineering initiative challenges teams of students to design and build a remote controlled four wheel drive vehicle which will negotiate challenging road surface obstacles and electronic tests. The designed vehicles must then be driven by the team around a model off-road track emulating the concept of a Land Rover 4x4 vehicle. The track is a specifically designed Land Rover test track, which tests the vehicles on a variety of surfaces and obstacles.