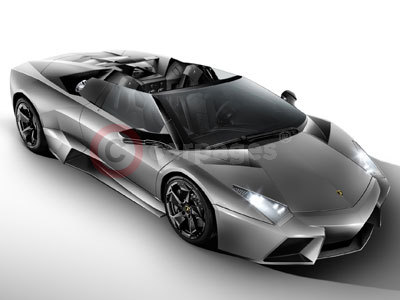 Lamborghini presents the ultimate driving machine among open-top two-seaters - the Lamborghini Reventon Roadster is a sports car of breathtaking fascination, menacing power and uncompromising performance. The 6.5 litre twelve-cylinder generates 493 kW (670 PS), catapulting the Roadster from 0 to 62 mph in 3.4 seconds and onwards to a top speed of 205 mph. The open-top Lamborghini Reventon is not only one of the fastest, but also one of the most exclusive cars in the world - Lamborghini has limited the series.

The powerful arrowhead form at the front, the mighty air intakes pulled way forward, the broad side skirts, the upwards opening scissor doors and the rear end with its menacing edges - the Roadster is clad in a design of maximum functionality and spectacular clarity. Details set stylish accents, such as headlamps featuring bi-xenon units with LEDs forming the daytime running lights and indicators. The rear lamps are also equipped with LEDs.

Behind the two seats are two hidden pop-up bars that deploy upwards in just a few hundredths of a second in the event of an imminent rollover. A fixed, horizontal wing-shaped member behind the seats bears the third brake light.

The driver can switch between two modes at the touch of a button - one digital view with illuminated bars and one level with classic round dials, albeit with changing colour graphics. Centrally located at the top of the display is the G-force meter. It represents the intensity of the forces acting on the Lamborghini Reventon Roadster under acceleration, braking and heavy cornering; the same format used in Formula 1.

The instruments are mounted in a casing machined from solid aluminium which is housed in a carbon fibre dashboard. The interior displays uncompromisingly clean craftsmanship and features a host of carbon fibre applications - e.g. on the centre tunnel - aluminium, Alcantara and leather. The central panels and the seat cushions are perforated, with precision stitching gracing their outer edges.

The V12 engine catapults the Lamborghini Reventon Roadster from 0 to 100 km/h (0 to 62 mph) in 3.4 seconds and onwards to a top speed of 330 km/h (205 mph). It reacts with the eagerness of a racing engine to input from the right foot, revving to 8,000 rpm and beyond, and performing a symphony that sends shudders along the spine. The deep booming bass, the powerful mid-range and the exultant horn section play music that, once heard, can never be forgotten.

In classic Lamborghini style, the aluminium engine is mounted longitudinally in front of the rear axle, with the transmission ahead of it beneath the centre tunnel. This layout results in 58 per cent of the overall weight being borne by the rear wheels - ideal for a powerful sports car.

Also standard on the Lamborghini Reventon Roadster is the e.gear automated six-speed sequential manual transmission. The driver controls the gear shift, which is activated hydraulically via two steering wheel paddles. In addition to the 'Normal' mode, the system offers a 'Corsa' and a 'low adherence' mode. The driver just has to keep his foot to the floor - the rest is handled by e.gear.

This is a 11-year+ news article, from our Lamborghini archive, which dates back to the year 2000.

If in doubt check with your local Lamborghini dealer as car prices and technical data will have changed since 2009.

Lamborghini Images may not be UK specification cars. Colours and exterior and/or interior elements may differ from actual models.