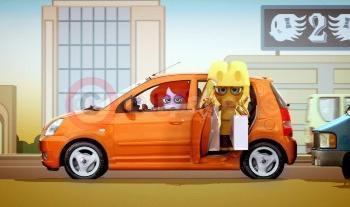 In a radical departure from normal car advertising Kia Motors is not following the well trodden path of perfect people in glamorous locations with clean, shiny cars on empty roads.

Taking a leaf out of the book of recent state-of-the art animated characters, like Nemo and Shrek, Kia is putting its cars into real life situations using seven computer generated characters to tell the story.

Paul Williams, Managing Director of Kia Motors (UK) Limited said: "Kia is on a growth curve that has not been achieved by any other car manufacturer. This demands an innovative rather than a me-too approach to gain cut-through in a crowded market. Our "Think About It" campaign will engage car buyers in a way that previous campaigns have not and put the brand in front of a much bigger customer base."

He added: "The campaign marks a significant development for the Kia brand as a whole, and seeks to establish Kia as a new proposition in the UK motoring sector."

Nick Mustoe, Chief Executive of Mustoes, Kia’s advertising agency, said: "Car advertising, with very few exceptions, has got stuck in a rut. The commercial pressure to succeed, and to some extent the motor industry’s obsession with product, has stifled creativity making very elegant and well crafted but ultimately formulaeic ads the norm."

"Our research indicated that the majority of customers are bored by glossy car ads and will respond favourably to a brand that breaks ranks and engages customers on a different level."

The "Think About It" campaign is launched on 1 July in the form of TV ads, Press ads and point of sale materials in dealerships. The initial advertisements feature the Picanto small car which went on sale at the end of May. The campaign, and the car, capture the secret of Kia’s success; fun, funky and fresh – the cars challenge you to take another look and to realise that value for money does not mean compromise, and that the smart decision is not always the ‘obvious’ one.

The central elements to the campaign are:

Kia is seeking to differentiate itself from the market and align itself with best of breed consumer brands who share a ‘smart value’ heritage. Kia’s first national TV campaign marks a significant investment for the company and the style will be rolled out on all new materials over the coming months.

The cartoonist for the advertisements is Pete Fowler who has worked on numerous commercial and advertising projects such as Levi’s/Cinch, Nintendo, Selfridges, and Swiss Telecom.

Director Pete Candeland of Passion Pictures worked alongside Pete Fowler to create the final result for Kia. Pete Candeland has worked on projects ranging from commercial to feature films and directed the music videos for the successful animated band, Gorillaz.