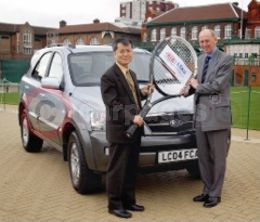 British tennis was boosted by the addition of a new sponsor today when car manufacturer Kia Motors committed to a three-year agreement with the Lawn Tennis Association worth up to £500,000 to grass roots competition in the sport.

Kia, whose confidence in tennis also extends to sponsorship of the Australian Open Grand Slam tournament and a global partnership with the ITF Davis Cup, will be the title sponsor of the National Club League – the largest competitive singles tennis league in the country.

The Kia National Club League will feature around 800 club teams represented by up to 7,500 men and women playing more than 11,000 matches between April and September. The first round of the National division begins on Sunday 4 April and the Grand Final takes place over three days at the West Hants Club in Bournemouth on September 3-5, with clubs competing for prize-money of more than £100,000.

"Kia’s support for competition at grass roots level underlines the company’s passionate support of tennis on a global scale and we are thrilled to welcome the company as a new sponsor to British Tennis," said John Crowther, Chief Executive of the LTA. "The Kia National Club League will encourage singles competition in clubs and help us in our prime objective of attracting more and better players into the sport."

Commenting on behalf of Kia Motors UK, Mr S.I. Lee, the President, said: "We are delighted to be extending our tennis connections with involvement in one of the most popular competitions in British Tennis. Kia is establishing itself as a young, friendly, sporty and active brand and tennis reflects these brand attributes perfectly. We look forward to a successful partnership with the LTA during the years to come."

As part of the new agreement, Kia becomes the Official Car of the LTA, providing cars for major events as well as top executives like Performance Director David Felgate and Davis Cup captain Jeremy Bates. Annabel Croft, former Wimbledon junior champion and TV presenter, has been appointed as the official Ambassador of the Kia National Club League.

"The Kia sponsorship will give the league a significant lift and help raise its profile as one of the most successful club competitions in British sport," said Paul Hutchins, former British Davis Cup captain and Tournament Director.