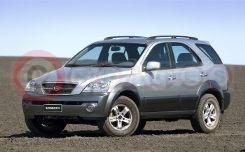 The new Kia Sorento will be appearing on UK shores for the first time at the British International Motor Show next week in Hall 2 of the NEC. The hotly anticipated 4x4 is already a group test winner in top German magazine auto motor und sport. Sorento will be on sale in the UK during early 2003.

Paul Williams, Managing Director for Kia Motors (UK) Limited, said of the new vehicle: "Press and public reaction to the vehicle before launch has been unprecedented. 2500 potential customers have already registered their interest in Sorento via our website. With its prestige looks, Sorento is set to change the face of Kia."

He added: "Sorento will make a dramatic impact on the large 4x4 market. Kia’s confidence comes from the outstanding success of the Sedona launched just three years ago. In September 2002 Sedona was the second best selling large MPV behind Ford Galaxy and the top selling large MPV to private customers."

Sales of Sorento in left-hand drive countries has already exceeded expectations, with the vehicle already available in Korea, USA and a number of European countries. Just three weeks after launch in Korea, Kia’s domestic market, orders for Sorento exceeded 20,000 and the waiting list stretched to six months. Due to Sorento’s exceptional popularity in these countries, the UK launch of Sorento is now due in early 2003.

Sorento won a group test ahead of established rivals. Sorento was pitted against rivals such as Mitsubishi Pajero (Shogun) and Jeep Cherokee in a road test involving on and off-road challenges and usability tests. The Sorento, they concluded, was "… the test champion and the only alternative".

Key equipment and specification details are yet to be confirmed, but when Sorento is launched there will be a choice of three trim levels and two engines, plus an extensive list of standard equipment, including driver, passenger and side curtain airbags, ABS with EBD, self-levelling suspension, limited slip differential, front fog lamps, alloy wheels and roof rails. The highest specification model is likely to be fitted with such luxuries as in-car DVD player and satellite navigation system.

Excellent driving comfort both on and off-road is maximised thanks to the double wishbone suspension on the front axle and the five-link solid rear axle with gas shock absorbers to provide stability over rugged terrain. Sorento’s suspension has been fine tuned by Porsche for optimum handling and ride comfort. Serious off-road driving will be possible with either part-time 4WD or full-time 4WD.

The Kia Sorento 2.5-litre CRDi is expected to be on sale early 2003, while the 3.5-litre V6 powered car will be available shortly afterwards. Prices are expected to be between £18,000 and £22,000 and will be confirmed, together with full specification details, nearer to launch.

If in doubt check with your local Kia dealer as car prices and technical data will have changed since 2002.