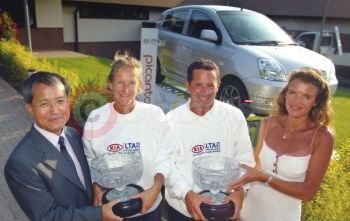 The Kia finals are the culmination of over 10,000 matches played by 800 teams from throughout the United Kingdom, in the country's largest grass roots tennis club tournament.

The winning teams also received £3000 each in prize money and the chance to represent, with one team member each, the UK in the Kia Amateur Australian Open held in Melbourne in January. Kia Motors are also involved internationally with tennis as sponsors of both the Australian Open and the Davis Cup.

The tournament saw some attacking competitive play in Indian summer temperatures exceeding 30 degrees. Speaking at the Finals, Mr S.I. Lee said: "Kia would like to congratulate both winning teams on their fantastic achievement. We are equally committed to supporting tennis at both the grass roots and the elite international level and we are delighted with the success of the first year of our sponsorship of the Kia National Club League."