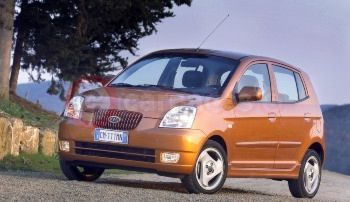 Kia, the fastest growing car company in the UK, is showing the Cerato for the first time in the UK. Kia’s rapidly expanding model line-up celebrates the addition of both a saloon and 5dr car to the line-up. Both designs clearly demonstrate Kia’s new generation of cars which place emphasis on style, space, specification and safety. For the first time in this segment Kia will be offering customers a choice of petrol and diesel engines but not for the last time Kia will be offering an excellent specification and pricing package.

The latest model to join the Kia range, the Picanto, goes on sale to the public on the first day of the show. The all-new Kia Picanto offers a winning combination of youthful styling, peppy performance, class-leading interior dimensions, low cost of ownership and ultra-low emissions, in an unrivalled value package, with a price range from £5495-£6995. This is a car with the dimensions to excel in the cut and thrust of the high street but with the interior feel, refinement and space of a supermini.

In keeping with the Live Action element of the Show and Kia’s global tennis sponsorships, there will be an opportunity to test your tennis skills on the stand and win a Kia Picanto 1.0GS, worth £5495. The competition involves recording your service speed, like the top players at the major tournaments, against a speed camera set up in a purpose built tennis gallery on the Kia Stand. Kia’s Tennis Challenge will be opened by Annabel Croft, former Wimbledon junior champion and TV presenter, who is the official Ambassador of the Kia National Club League. All participants will be entered into a prize draw to win the car. There will also be a daily prize of a pair of tickets to a major UK tennis tournament for the fastest serve on each day of the show.

Kia, whose involvement in tennis extends to sponsorship of the Australian Open Grand Slam tournament and a global partnership with the ITF Davis Cup, is the new title sponsor of the National Club League – the largest competitive singles tennis league in the country. Kia is also the Official Car Supplier of the Lawn Tennis Association (LTA), providing cars for major events as well as top executives like Performance Director David Felgate and Davis Cup captain Jeremy Bates.