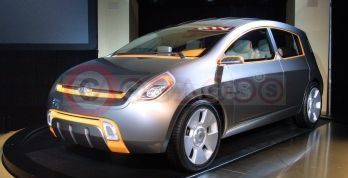 Designed for the driver seeking passenger- and cargo-carrying versatility without sacrificing driving enjoyment, the Kia KCD-1 Slice concept is a fresh alternative to useful but dynamically cumbersome SUVs. The KCD-1 Slice will be making its European debut at the Geneva Motor Show on Tuesday 4 March.

"This vehicle is designed to carry volumes of baggage from home one day and to have fun on twisty roads the next," said Eric Stoddard, the Hyundai-Kia Design Center designer responsible for the vehicle’s exterior. "We gave it all the cargo-carrying versatility of an SUV without the handling and fuel consumption penalties."

Kia was keen to produce a concept car that proves attractive styling can be successfully combined with load-carrying ability and, should it go into production, the KCD-1 has surpassed these ideals. In addition, the vehicle’s V6 powertrain and aggressively tuned suspension will deliver the kind of performance in either front-wheel drive or all-wheel drive configurations that most SUV buyers can only dream about.

With its distinctive silver-grey exterior accented with orange, the KCD-1 Slice presents the world with a cheerful face. The wide angled headlights and narrow grille flanking a tasteful badge give the vehicle an appealing look. Viewed from the side, the Slice features a character line that extends from the front wheel arch to the rear wheel arch. At the same time the dramatic windscreen angle continues in one arc to form the roofline. A slight kick in the roof over the rear hatch opening gives the vehicle a sporty look.

"The goal was to create a smooth, clean, sporty exterior highlighted by precise details that seem to be sliced from the materials they are made of," Stoddard said. "The Slice name, which implies getting to the core by stripping away the extraneous, was a design theme from the beginning in the studio."

No production plans have been announced for the Slice, but it will appear at a number of international shows in the months ahead to test public reaction to its innovative design and wide array of useful features.

New Executive Saloon Takes A Bow
Kia’s new executive saloon Opirus will be making its world debut at Geneva. The new Kia Opirus replaces the Kia Enterprise, which is only available in the Korean domestic market. The car is only being produced for left-hand drive markets and will not be coming to the UK.

Powered by a 3.5-litre engine with five-speed automatic transmission, the saloon has the necessary equipment and dimensions to provide sumptuous accommodation for five adults. Opirus is set to take Kia a step further away from its outdated image as a producer of small, cheap cars, providing a level of sophistication and a range of features more usually reserved for luxury segments.

Petrol-Powered Sorento Steps Out
Further Kia models on display at Geneva include the recently launched Kia Sorento with its 3.5-litre V6 powerplant, which is set to arrive in the UK during late spring with automatic gearbox as standard.

The diesel-powered Kia Sorento went on sale in the UK on Friday 14 February and within a week of launch all initial stocks of the range-topping XS were exhausted. During 2002, 94,783 Sorentos were sold worldwide and Kia expects to sell 175,000 in 2003.

If in doubt check with your local Kia dealer as car prices and technical data will have changed since 2003.