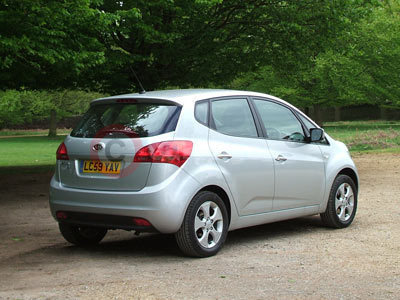 Inside, Kia suggests that the Kia Venga, a B-segment car, has as much space as a C-segment car. Without getting out a tape measure, I couldn't say for sure. But what I can say is that there is plenty of space and not just in terms of headroom.

All five seats are equally as comfortable and everyone has enough leg- and elbow-room, even in the back. Here, the seats have the ability to slide fore and aft by 130mm, so extra legroom is available when it is not needed for luggage. You can push the seats as far forward as they will go and you still won't hear many complaints and this is mainly due to the extra length of the wheelbase.

Under normal circumstances, there is 444-litres of boot space behind the rear seats of the Kia Venga, and this can be increased to 570-litres if the upper boot floor is folded away and the second tier is used. There are moulded compartments and anything in the lower section will have to share with the spare tyre, albeit a 'get-you-home' one.

Here, the Kia Venga test car had a cargo net, attached to four anchors which is all well and good but I couldn't see where to fix them in the upper area, where it is needed more. The flat floor means that there is a tendency for the contents of shopping bags to spill. That said, we shouldn't complain, as retaining nets tend to be an optional extra as far as some other manufacturers are concerned.

So, the standard load capacity is generous for a car of this size and the result of some clever packaging but as you would expect, the rear seats have a 60:40 split and fold function. In the case of the Kia Venga, this is known as, Fold & Dive, because the seat backs fold to form a flat floor with the upper platform. Making use of this ability increases the luggage capacity to a maximum of 1,468-litres.

At the front of the cabin, the A-pillars are set well forward but unfortunately, even though they are divided for extra visibility, the front section is still obstructive and broad enough to hide large objects, and at junctions the driver is likely to find his or herself having to peer around them.

That aside, the Kia Venga's interior could be described as sensible but definitely not boring, thanks to the bright highlights either side of the compact centre stack and also surrounding the large steering wheel boss including the chunky, lower spoke.

The centre console narrows as it flows downwards to the gear-shift mount, taking in the audio controls, the distinctive dial that is the comfort controls and a small cubby where the power outlet and auxiliary sockets and ports reside.

The seats in the test car were covered in a black fabric with a smart tweedy-grey centre panel, which compliments the interior colours well.

Navigating the trim levels is as easy as 1, 2, 3…quite literally. Kia Venga 1 starts the show with air-conditioning, height adjustment for the driver's seat, fully adjustable steering column and electric front windows amongst other things.