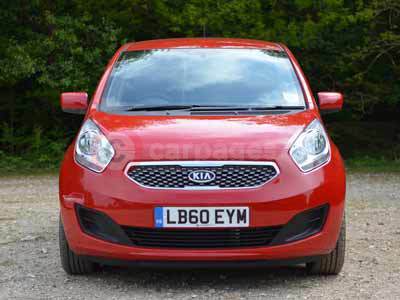 The Kia Venga was designed by Kia's Chief Design Officer, Peter Schreyer, who also happens to be responsible for the Kia No3 concept car - from which the Venga carries over design elements and detail touches, as well as the Audi TT and a number of other iconic cars, which bodes well for the Venga.

Both the Kia Soul and Kia Venga are based on Kia's small-car platform, which will also be used for a number of cars in the future. However, whilst the Kia Venga is 37mm shorter than the Kia Soul, it has a 65mm longer wheelbase, providing additional usable interior space.

The exterior design features long swept-back headlights with concave swage lines along the length of the car and prominent wheel arches, all of which suggest dynamism. The front profile, featuring Kia's 'Tiger Nose' grille, gives a surprisingly muscular and dominating appearance which, as far as I am concerned, is welcome.

Three trim choices are available, the Kia Venga '1', '2' and '3', which help to keep options and grading simple for customers. Diesel models feature an EcoDynamics badge, which again is for customer clarity, making it obvious that they are the most frugal models. The test car was the Kia Venga 2 Eco.

Kia tells us that they don't see the Kia Venga as a conventional small MPV, but instead, it is a B-segment car with family needs in mind i.e. space, safety, comfort and versatility.

Three engines are available for the Kia Venga, with either manual or automatic transmissions. The diesel engines feature Kia's EcoDynamics technologies, which help with fuel saving and cut CO2 emissions, and include Intelligent Stop and Go (ISG). ISG switches off the engine if it is idling and the gearlever is in neutral. As soon as the clutch is depressed, the engine is restarted. I am most definitely a fan of this technology, although I do find it a little disconcerting to not hear the engine whilst stopped at traffic lights.

The two petrol engines are a 1.4-litre 89bhp (90PS) unit mated to a five speed manual gearbox and a 1.6-litre 124bhp (125PS) unit which comes with four-speed automatic transmission. The 1.4 engine is shared with the Kia cee'd, whilst the 1.6 is the same engine used in the Kia Soul.

During my time with the Kia Venga, I intentionally sought out a number of demanding hills to put the car through its paces, and it coped extremely well. Mid-range power is not lacking, although a little run up is sometimes required for steeper hills and for over taking, where power is needed more quickly.

Whilst official Kia figures report 65.7mpg on the combined cycle, we were achieving figures between 55-60mpg. There is no doubt that these are respectable figures, however, the EcoDynamics badge gives the impression of achieving outstanding results, which is possibly a slight let down.

These figures do however provide tax advantages for both private and fleet users. Benefit-in-kind taxation for company drivers is 13 per cent, while the annual Vehicle Excise Duty is -0 for year one and £30 for year two.