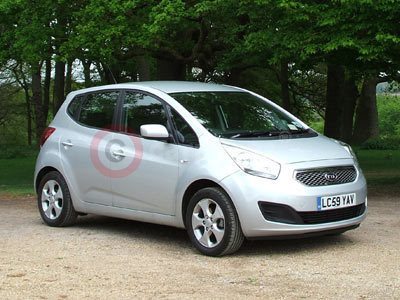 Avid viewers of television drama, Lost, will already be familiar with the new Kia Venga, which sponsors the show. For those that haven't seen the advertisements throughout the programme, they feature people of Lilliputian proportions, in various parts of the car; the glovebox for instance or jumping through the sunroof. The message is clear – the Kia Venga is a big, small car.

Kia puts it in the mini MPV category, a term that has somehow grown out of the humble 5-door hatch, and for sure at just over 4-metres in length, it doesn't have a very large footprint but it is big on practicality. The 'small car' underpinning for the Kia Venga was first used in the unusual but roomy Kia Soul and will also form the basis of the next Kia Rio, when it arrives.

When it comes to the numbers game, the Kia Venga is 37mm shorter than the Kia Soul but has a wheelbase that is 65mm longer, which means that we have a 'wheel-in-every-corner' layout and that is where the idea of space comes from. However, it is more than an idea.

Like the Kia Sorento, the Kia Venga is from the pen (or pencil) of Peter Schreyer, Kia's Chief Design Officer. He and his team started with a blank piece of paper and came up with the No.3 concept car shown at last year's Geneva Motor Show. The Kia Venga carries a lot of the No.3's design elements but in a slightly different package.

Although small and tall, the Kia Venga's proportions don't look awkward; in fact it could almost be described as sleek, with strong swage lines at the base of the doors and a very small spoiler at the top of the tailgate. The upward rise of the window line, from front to rear, accentuates the length of the car, while protruding wheelarches add a sense of balance.

At the front, there is a cheeky grin formed by the broad lower grille and large light clusters that extend almost to the base of the windscreen. The bonnet appears a little stubby but that is part of the pedestrian safety programme which, together with other measures, is expected to lead to an overall 5-star rating from Euro NCAP.

The Kia Venga's smoothly integrated bumpers at the front are echoed by those at the rear, where the outer edges of the large rear light clusters swoop downwards to the base of the tailgate. Overall, I think that the most apt description would have to be chunky-smart.