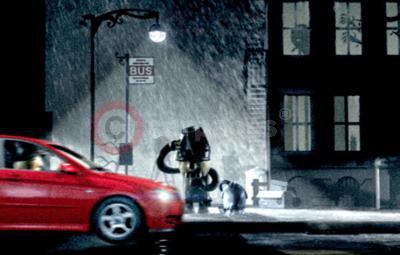 Kia is bringing its distinctive, award-winning "Think About It" animated advertising back to TV in February featuring the company’s well-established "£1 deposit" offer.

Following the run-away success of its Picanto launch advert, the first TV advert to feature the Pete Fowler designed characters, Kia is using a retro-style "film noir" atmosphere to get across its message that buying a Kia is simpler than waiting for a bus.

The dark and threatening setting of the advert coupled with the appeal of Kia’s Cerato mid-sized hatchback clearly illustrates the unique Kia proposition of a £1 deposit - a market offering unique to the brand - the fastest growing car brand in the UK, Europe and the World.

Written by Mick Mahoney & art directed by Andy Amadeo of the Mustoes agency it continues the pair’s relationship with the character designer Pete Fowler. The work is directed by Pete Candeland - who previously directed animated videos for Damon Albarn’s Gorillaz - through Passion Animation.

This £1 deposit film is the second to air in this distinctive style, and follows the award winning launch film for Kia’s Picanto city car which picked up Autocar magazine’s prestigious ‘Best Car Advertisement’ award in November 2004.

Lawrence Hamilton, General Manager of Marketing at Kia, said "The £1 deposit is something that Kia now owns in the minds of the audience and we’re delighted that Mustoes continues to develop commercially relevant insights with strong, big ideas."

Mick Mahoney, Executive Creative Director, said: "The new ad is based on the simple observation that most bus fares cost £1, the same price as a new Kia, and that it doesn’t take a genius to spot which one is the best value."

He added: "The spot has a 60s film noir feel to help reinforce just what a miserable experience waiting for a bus can be. The intention for the campaign is animate each car offer with its own tone of voice, whilst keeping the central campaign idea and characters the same."