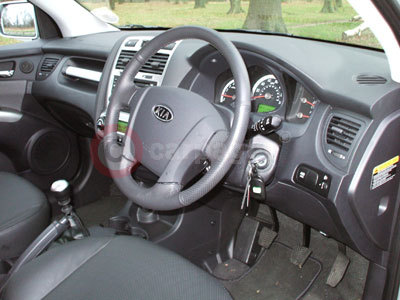 The 4WD, Kia Sportage has an ‘on-demand’ system called Active Torque Transfer or ATT - it does what it says on the tin, kicking in when needed, in order to maintain traction. Even with the revised suspension system, the Sportage isn’t built for rock-crawling but it will allow you to take on muddy forest tracks and green lanes, for which, the 4WD Lock should be activated via a button on the dashboard.

I have mentioned the new suspension, which is all-round, independent and tweaked for better ride quality but that is not all; body roll has been reduced and the steering has been improved and is now much more positive and direct. All of which, inspires confidence on and off the beaten track.

The brakes are not mentioned often save to say that they are usually anti-lock (ABS) and come with Electronic Brake-force Distribution. This is the same for the Sportage but with bigger disks than before, the stopping power is impressive. Incidentally, ESP is standard on the TITAN, only.

The interior has also had a bit of a revamp for ’08 but, generally, these are small improvements, however they add up to a substantial change. For instance, you wouldn’t think that lowering the rear seats by just 5mm could make much of a difference except, perhaps, to tall people.

The three rear seats have the usual, 60:40 split but feature Kia’s, one-touch, ‘Fold and Dive’ function that makes it easy to increase the luggage capacity from 667-litres to a maximum, 1,887-litres - the advantage of having a relatively long wheelbase. The tailgate also splits, so in confined spaces, just the glazed part can be lifted.

In the front of the cabin, the driver now benefits from lumbar support and has two dials for adjusting the seat height. In order to accommodate European shapes and sizes, the front seat squabs are now some 40mm longer and 20mm wider and, despite feeling very firm, they are nonetheless, comfortable, even on long journeys.