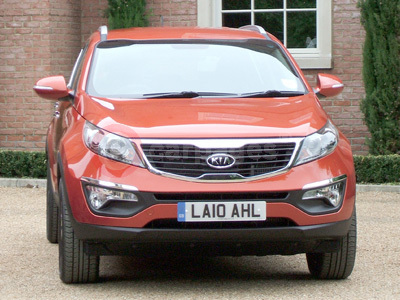 When Korean motor manufacturer, Kia decided to branch out, the Kia Sportage was one of the first vehicles to be launched in the global 'push'. Up until then, Kia had majored on domestic-based sales, building cars under licence from other car-makers.

A meagre start maybe, but it is this background that has formed a solid basis for the company to reach mainstream status. And, if you are in any doubt, the new Kia Sportage will soon change your mind.

You can't get more mainstream than a crossover, as it would seem that every car manufacturer has one. It is true that many of them are much of a muchness, however, the new Kia Sportage is one that stands out from the crowd and not just because it is orange and not because it carries any outrageous new technologies; it is simply an almost perfect package and very easy to live with.

Kia fans might not have expected to see the car quite so soon as it was due to go on sale until November 2010 but because of the praise it received when it debuted at the Geneva Motor Show earlier this year it was decided that a limited number of right-hand drive versions could be brought into the country ahead of schedule.

These unique, Kia Sportage First Edition models all have a 2.0-litre diesel engine, with either a 6-speed manual or automatic gearbox and the company expects them to go quickly with anticipated sales of around 1,780 this year and 10,000 in 2011. I for one, wouldn't be at all surprised if those figures are easily achieved.

I have mentioned the metallic Techno Orange, which suits the car beautifully but there are four, more subdued colours in the line-up, but any one of the will show off the new styling to great advantage.

From sketchpad to production has taken three years and the result is a completely new third generation, Kia Sportage, which is very different from the previous model.

The new Kia Sportage crossover is longer, lower and wider than its more SUV-orientated predecessor and has a much wide track, front and rear, which along with a slightly stretched wheelbase makes for more interior room. It also offers a larger canvass for Chief Design Officer, Peter Schreyer and his team, to come up with something to rival the Nissan QASHQAI (as usual), the Peugeot 3008 the Ford Kuga and the Volkswagen Tiguan.

The first two are definitely the one's to beat and I would add the Mitsubishi ASX to that list. The Kia Sportage has has a very similar feel to the Mitsubishi ASX but is much better looking. After all, according to Mr Schreyer, "the aim was to make it an object of desire rather than simply a mode of transport".

So what we have is a rakish, sporty looking exterior, with a far more muscular attitude to the old Kia Sportage and even with a good deal of metal compared to the narrow windows, it appears sleek rather than overly macho.