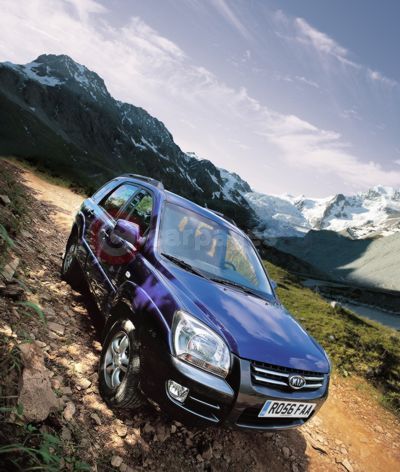 The Sportage 2.0 CRDi XS surpassed its competitors such as the BMW X3, Range Rover TdV8, Audi Allroad TDI and Landrover to pick up the title of Best Value 4x4 2006.

The Sportage diesel was only introduced to the UK market in February 2005 and after less than 2 years on sale has proved to be one of Kia's best sellers. The Sportage continues Kia's drive to launch new models which are modern, stylish and technically sophisticated, while retaining the marques' strong adherence to value for money.

Planet 4x4 's first annual awards were based on the results from tests that were conducted over a week at one of Britain's best 4x4 sites. Vehicles were assessed on seventeen different criteria by a panel of expert judges and the Sportage stood out from the competition in areas such as packaging, practicality, performance and dynamics as well as the general appeal.

Providing readers with valuable information prior to purchasing their new vehicles Planet 4x4 's m arks for the testing were weighted to take account of the importance placed on each by typical buyers. The single criterion attracting the highest score was value for money.

Alan Kidd, Editor of Planet 4x4 , said: "One word that kept cropping up in the testers' notes about the Sportage was 'surprise'. Not just because of what it'll do both on and off-road, but the quality of its cabin and in particular a level of practicality that punches way above its weight. This is a real little giant-killer, and at £18,195 it's no wonder the Sportage is Britain's Best-Value 4x4.

"It's the Sportage that won the testers' hearts wherever it went. Packaging, practicality, performance, dynamics and general appeal all stood it in good stead, and with so much equipment on offer it makes you wonder why you should bother digging any deeper into your pockets," he added.

Designed to provide safe and economical on-road characteristics with the ability to handle demanding conditions away from the highway, the Sportage takes on the established hierarchy as well as offering a real SUV alternative to saloon and hatchback drivers.

Stephen Kitson, Communications Director said: "This accolade for the Sportage proves that it's not just one of our best sellers but one of our best value cars as well. We are delighted that Planet 4x4 chose to pitch Sportage against some of the big names and especially pleased that it came out top for value. Sorento is already established in the 4x4 market and this award helps the Sportage to get its foot firmly in the door as well."