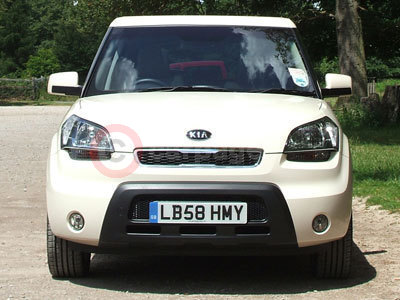 Depending on your outlook, the Kia Soul can be regarded as a bit of an oddity or a bold statement of fun and lifestyle choices. While both apply in equal measures, Kia's new crossover is clearly popular.

Over 5,000 European customers have taken delivery of their Kia Souls since it went on sale in January 2009 and, in the UK, the 1,000th car was delivered at the beginning of June, just 100 days after it went on sale.

The Kia Soul concept was unveiled at the North American International Auto Show (NAIAS) in 2006, where it received a warm welcome and two years later the production version, which had changed very little, was debuted at the Paris Motor Show.

Based on a new platform that will also form the basis of some future Kia models, on paper, the Kia Soul seems much the same as any other B-segment car; a hatchback that is around 4-metres in length, has five seats and front-wheel-drive. However, it differs from the norm in that it has a longer wheelbase than most and it stands almost 1.6-metres tall and that translates to a high seating position, more interior space and enough ground clearance to make the largest, 18-inch wheels look as if they belong.

The distinctive, boxy shape is similar to that of the Citroen C3 Picasso but the Kia Soul carries a lot more pizzazz. The bonnet is high and rounded with an almost minimalist layout. A chunky, trapezoidal lower grille protrudes slightly from the deep front bumper. Above, marking the edge of the bonnet, is a broad but narrow upper grille flanked by angular wraparound headlight clusters. This uncluttered look compliments the deep front windscreen with piano-black A-pillars, which almost disappear, making the roofline seem as if it is floating.

This effect is continued at the side, emphasising the slightly wedged windows and almost imperceptible slope of the roof towards the rear. The window base-line forms a straight line, while the belt-line, below, slopes upwards from the side air intake panels and indicator repeaters. Chunky, body-coloured wheelarches blend nicely into the body and curve around into the front and rear bumpers.

Originally, it was intended that the Kia Soul's rear door would open both upwards and as a conventional door, but Kia has since settled on the tailgate format. The rear light clusters are separate from the tailgate, allowing a sensible rectangular shape to the door, which makes loading easier.