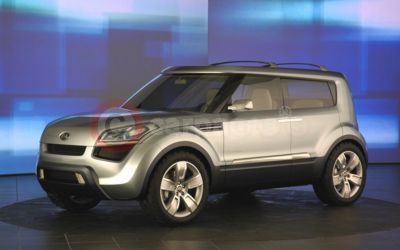 Kia Motors Corporation (K.M.C) and Kia Motors America (K.M.A) today unveiled the all-new Soul concept car during a press conference at the North American International Auto Show (N.A.I.A.S) in Detroit. The Kia Soul concept is a crossover utility vehicle (C.U.T) with a sporty, bold look that builds on design cues from the Kia Mesa concept vehicle introduced at the 2005 N.A.I.A.S.

"We wanted to inject some living, breathing life into this car’s design - give it a soul, if you will, and the word ‘Soul’ is a homophone for the home city of Kia Motors Corporation headquarters, Seoul, South Korea."

Atop the sloped roofline is an automatic panoramic sun/moon roof. The front section of the panoramic roof slides backward and fits over of the rear section allowing for open-air driving with unobstructed views for both front and rear passengers. Roof racks are integrated into the Soul’s design with rails for sliding objects forward and backward.

A symmetrical combination headlight design builds on previous touches from the Mesa concept. The front brush guard with integrated fog lamps is functional and helps convey the Soul’s SUV toughness.

The Soul’s side panel construction was designed with safety in mind and is strong enough to allow "freestyle" passenger doors (rear-hinged in back) that, when opened, reveal the lack of a B pillar, which makes for easier ingress and egress. High taillight placement lends to a contemporary look but also to better visibility and safety for occupants.

A rear brush guard smoothly envelopes the license plate underneath a power lift gate activated by the key fob. And the rear lift gate includes a unique backpack compartment that folds out like a mail slot for wet or muddy items such as a wetsuit and hiking shoes.

The Soul’s interior was inspired by high-quality audio equipment. In fact, "The dash area was designed around the front audio speakers rather than the other way around," said Kearns.

Furthering the multimedia entertainment system is a notebook computer with a multi-purpose video game monitor housed in the glove compartment area. The notebook sits on a tray that swings outward and becomes accessible to either the passenger or driver seating positions. The multimedia system includes Blue-tooth and MP3 technology as well as multiple USB ports, Wi-Fi and telematics. Video monitors that fold up and out airline style from the centre console, which runs the length of the cabin, are available for rear seat passengers’ entertainment.

Cabin ambience is accentuated by upscale interior lighting. Instead of a typical dome light there is a lighting element surrounding each panoramic sun/moon roof.

Soul’s shape promises lots of interior space relative to its footprint; though small on the outside, Soul is big inside with reconfigurable cargo space. Two semi-bucket seats in front comfort the driver and front passenger, while flat-folding rear seats create even more storage space.

"The Kia Soul proves that you don’t have to sacrifice style to have an extremely flexible vehicle that can meet the demands of an active and engaged lifestyle," said Len Hunt, executive vice president and COO of KMA. "It’s sporty but useful, exciting and enabling."

The front-drive Soul is powered by a 2.0L, inline four-cylinder petrol engine. The powerplant is mated to a five-speed automatic transmission with manual shift capability and adaptive cruise control for active driver control and convenience.