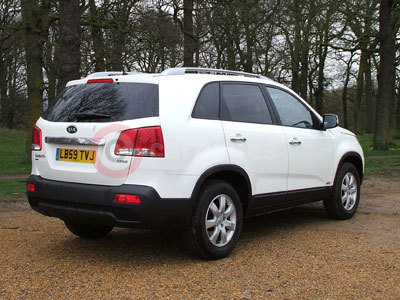 The Kia Sorento's rear end is imposing and to certain extent echoes the design cues of the front. The glazed area is broad stretching the full width of the car. It also has a V-neck and while it is deep, it finishes quite high up the lifting tailgate, which makes the car seem even larger.

The large taillight clusters contain an array of LED lights. Actually, only the KX-3 level has LEDs and the rest are simply look-alikes, but very convincing. Again, the deep rear bumper, with its mesh grille, adds to the wide and imposing impression.

The new smart exterior is carried over to the Kia Sorento's cabin, where the dashboard layout is stylishly simple without being austere. It is also well thought out and I particularly liked the two-tier tunnel console. The upper part is in a brushed aluminium effect, which forms a broad surround to the gear shift, while ahead of this is a recessed cubby and underneath is another, almost hidden, storage area.

The same brushed aluminium accents separate the upper and lower levels of the fascia and wrap around into the doors, so that the driver feels enclosed and part of the car. The dashboard is quite tall and that makes the driver feel as if they are in control of something substantial.

The instrument panel features three overlapping dials with white graphics, while the displays in the centre console, from the recessed digital clock at the top, through the audio panel, to the comfort control at the base have red illumination.

In the Kia Sorento 1 and KX-1 models, the seats are covered in a black fabric and the dash and door trims are in a black woodgrain finish. The KX-2 and KX-3, on the other hand have the metallic trimmings, black leather upholstery and fabric-covered pillars and sun visors. Customers choosing the Kia Sonrento KX-3 version can also specify a cream leather interior.

The rear passengers have plenty of legroom, even though the new Kia Sorento is 95mm longer than the previous model; the wheelbase has been reduced, slightly. However, a slight re-shuffle inside and thinner, but no less comfortable, seats have made for ample room - enough to add to extra foldaway seat in the very back. These seats haven't been skimped on either; they have the same upholstery and comfort levels as the second row seats.

Obviously the rearmost seats have a 50:50 split and fold flat into the boot floor but the second row has the standard 60:40 split and tumble fold so it is easy to get into the rear. This second row also has a recline function for extra comfort.

With five people on board, the boot has a luggage capacity of 531-litres, which is a 15 per cent improvement over the old Kia Sorento, which represents an improvement of 96-litres. When both rows are folded this increases to a maximum of 1,525-litres and with them all up, there's 111-litres of luggage space.