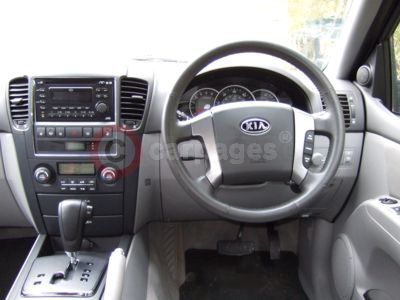 When we tested the 3.5 V6 petrol engine in Ireland, we obtained 25 mpg whilst touring, with the new diesel we saw an increase of around 8 mpg, not stunning but a good saving with today’s fuel prices.

As we drove the XS model our test car was fitted with full-time electronically-controlled torque-on-demand four wheel drive, which automatically varies the front to rear torque distribution to ensure traction in varying conditions. The top of the range XT model has the same system where the XE requires human interaction to switch from rear wheel drive to four wheel drive.

Kia have worked hard on the ride and suspension which has been improved, the Sorento is still built on a ladder-fame chassis, which is better at withstanding  heavy duty off road use compared to the monocoque principals used by some manufacturers.  But now they have fitted all round independent suspension with wishbones at the front and a five-link system at the rear, with gas dampers on all corners. The ride is pretty good both on and off road albeit a bit bouncy. Handling can be un-settling through demanding bends, where body roll is noticeable, which can hamper progress even on sweeping ‘A’ roads.

Off road we took the Sorento across our friendly farmers’ tracks and it took pretty much everything we threw at it, only on one occasion did it feel like it was going to come unstuck. It does not have the sophisticated electronic systems of the likes of the Land Rover Discovery 3 but will venture where soft roader's would dare to tread.

Our car was not fitted with a tow pack, so we cannot report on the Sorento’s towing capabilities only to say it has won the award of Tow Car of the Year for 2006 from the Caravan Club. It was also awarded Best 4x4 of 2005 by 4x4 Magazine and topped the J D Power and Associates Customer Satisfaction Survey in the 4x4 category. We were interested to see that the diesel automatic can tow a braked trailer of 3,500 kg, where the manual only 3,000 kg and the petrol model 2,800 kg.

The Kia Sorento has been tested by NCAP and received a credible four star rating, which is the same rating as Land Rover’s Discovery 3 and Audi’s Q7. The top of the range Sorento XT model has Electronic Stability Programme (ESP) as standard; we would have preferred to see that all models were fitted with ESP. Although all models have twin front airbags and full length curtain airbags, 3 point ISOFIX child seat mountings on the two outer rear seats and anti-lock brakes (ABS) with electronic brake force distribution.