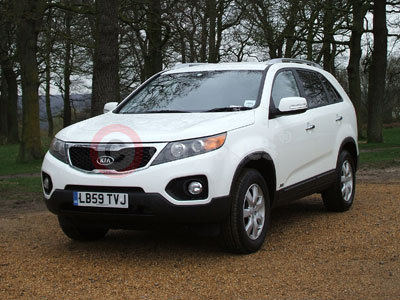 The new Kia Sorento went on sale in January 2010, but curiously, the all-new car was designed far from UK shores - but not where you might.

It started life at the Kia Design Studios in California far away from the gloomy winter we've just experienced. The Chief Designer Officer, Peter Schreyer was in charge of proceedings and his brief was to take into account the way that SUVs and their users have changed in recent years.

A little more urban and a lot less agricultural is what was required; not that the previous Kia Sorento resembled a tractor but did have more off-road capabilities the new version. So the new Kia Sorento has been re-designed from the ground up in order to appeal mainly to the 'Yummy Mummies'of this world while still retaining, to some degree, the towing and off-road capabilities, should they be needed.

The easiest way to please both groups was for Kia to offer the new Kia Sorento in both 2- and 4WD and with a choice of five or seven seats so it crosses over into MPV territory. And, in keeping it simple, Kia is offering an engine choice of just two; a 2.4 petrol unit and a 2.2 diesel, more of which later.

Starting with the fundamentals; the new Kia Sorento has a monocoque chassis in place of the old ladder-frame style with the body on top. This does mean a reduction in the towing ability - 2,500kg rather than 3,500kg, which happens to be the maximum allowed. The reasoning behind it was that very few Kia Sorento customers and, indeed owners ever pulled this maximum weight or took the car on some serious off-road adventures, so reducing some of the capabilities wouldn't spoil anyone's fun and the weight and therefore, fuel benefits were far more advantageous. In short, the Kia Sorento has gone up-market.

Along with the new underpinning, the Kia Sorento's body styling has changed quite considerably, too. The front end now sports a variation of the Kia 'Tiger Nose', which looks a little like the front end of a Honda Civic in that the headlights and grille meld to form a shallow V with a flat upper edge that curves around the bonnet. Especially noticeable in the white body colour, are the black front fog-light housings, in an arrow shape that seems to point to the equally black, upturned front bumper.

Although the total width of the new Kia Sorento isn't any different to the previous model, it has a more truculent stance. This is due to the widened track - 38mm at the front and 41mm at the rear. In combination with the reduced height and ground clearance, the Kia Sorento looks a tad mean but not enough that it would look out of place in town society.

The black bumper continues towards the rear as sill and flattened wheelarches containing 17- or 18-inch alloy wheels, depending on the trim level. Just above, a strong design line runs across the doors emphasising the rising windowline. Aft of the black B-pillar there is darkened privacy glass and the C-pillars have a distinctive, broad trapezoidal shape to them.