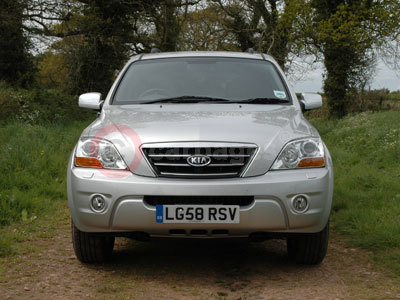 The Kia Sorento was launched in 2003 and was the company's first foray into the world of full-size SUVs or as we prefer to call them in the UK - four wheel drives.

We first tested the Kia Sorento Review in October 2003. In that review we road tested the petrol 3.5 litre V6 XS model with an automatic gearbox. This model has now been deleted and you can only buy a manual or automatic 2.5 litre diesel.

It may be helpful to read the previous review as well as this one for an in-depth look at the Kia Sorento.

In 2006 the diesel engine was revised and incorporated a new electrically-actuated variable-geometry turbocharger which makes this Kia Sorento 21 per cent more powerful (168bhp at 3800rpm) and 25 per cent more torquey (392Nm at 2000rpm) than the original model.

The 5-speed manual diesel Kia Sorento that we tested accelerated from 0-62mph in 11.6 seconds and is able to continue on to a maximum speed of 113mph.

The engine is responsive, torquey and willing to please. But we felt that the sound deadening could be improved because on long motorway runs the engine tended to drone on a bit.

Kia quote a fuel a combined fuel consumption figure of 32.8mpg and CO2 emissions are quoted as 228g/km.

The Kia Sorento's 5-speed manual gearbox has quite a long throw and the travel of the clutch is long which can make it a little tiresome to change gear after a while, especially around town - we much prefer the automatic gearbox.

The Kia Sorento's suspension is far too soft for our liking and on occasion made us feel a little sea sick, but of course when you are off-road it does help to absorb impacts and ruts - it is just a bit bouncy on-road.

Do not expect the handling of a Land Rover Discovery 3 and you won't be too disappointed overall, it can be a little bit roly poly and unrefined.

When off-road the Kia Sorento is quite composed and although we did not venture too far into the wilderness it proved itself quite capable on green lanes and farm tracks.

The Kia Sorento is built around a sturdy ladder-frame chassis which gives it a far greater degree of off-road prowess. There is a sturdy under-body skid plate to protect it from rocks and tree stumps. Ground clearance is a little over 20 centimetres with approach and departure angles of 28 and 26 degrees respectively and a ramp angle of 22 degrees.

There is a low-ratio transfer gearbox and the XS, XT and TITAN versions of the Kia Sorento have Kia's all-electronic torque-on-demand full-time four-wheel-drive system. This varies the amount of engine torque going to the front and rear wheels automatically, with no need for driver intervention, so that the car is always running in optimum trim regardless of road surface or conditions.