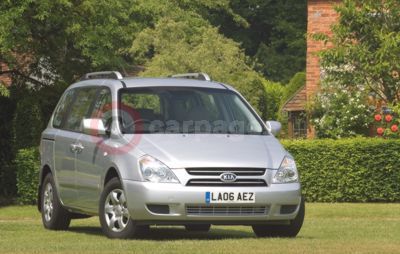 By any yardstick, the Kia Sedona has been a huge success. It has consistently been the second best-selling large MPV in the UK, but number one with private buyers looking for value for money from a spacious, practical, affordable, easy-to-use family car. Kia has sold more than 31,000 Sedonas in the UK in six years.

Features new to the Sedona line-up include triple-zone air conditioning, electric sliding rear side doors, climate control, rear electric windows, a cut-off switch for the front passenger airbag and a conversation mirror so that parents can keep an eye on younger members of the family in the second- and third-row seats.

Six airbags - front, front side and full-length curtains - are fitted to every model. Kia is confident of a four-star Euro NCAP crash-test rating, putting the new Sedona on an equal footing with the vast majority of rivals.

Even the risk of minor parking bumps and scrapes has been reduced, with reversing sensors fitted to LS and TS models.

In other markets the Sedona is sold as a 5.1 metre, long-wheelbase model that seats up to 11, but the seven-seater version available in the UK has been created specifically for Europe.

Using the same platform that also underpins the new Magentis saloon, its overall length of 4810mm makes it 120mm shorter than before, but the wheelbase is almost the same at 2890mm (still one of the biggest in class) and the cabin is actually 177mm longer as a result of some particularly clever packaging. The new Sedona is also 85mm wider (1985mm excluding mirrors) and 25mm taller (1760mm) to ensure it meets buyers' space requirements.

The appearance is modern, clean and European, with SUV undertones. The front is bolder, the base of the windscreen is further forward to give a more dynamic sweep to the higher roof and the rear panels and the tailgate have a squarer, more stable appearance that draws attention to the wider track. Wheels and tyres of 16 inches (GS and LS) or 17 inches (TS) fill the arches.

It's not all change, though. The old car's best points are found on the new one - like the sliding rear side doors which make life easier when helping kids aboard. But on the new Sedona those doors are electrically-operated on LS and TS models. All versions have electric rear windows for the first time.

The seating layout has been changed from 2-2-3 to 2-3-2, a format buyers regard as essential in a large MPV for Europe. There are now five individual rear seats instead of two in the middle plus a rear bench.

Each of those seats slides forwards and backwards, reclines, folds in half, stores upright or comes out of the car altogether. Kia decided against folding rear seats because of the compromises involved. Folding seats have to be smaller and are therefore less comfortable, and they have to be mounted higher in the car, which steals headroom, legroom and luggage space.

Kia will continue to offer V6 petrol and four-cylinder diesel Euro IV engines, but both develop 40bhp more than before.

The diesel, on sale 1 July, is a 2.9-litre unit, now with second-generation common-rail injection and a variable geometry turbocharger. It develops an increased 182bhp and 343Nm, enhancing performance while preserving the 36.2mpg combined economy of its predecessor.

The V6, on sale in December, is Kia's new 2.7-litre Mu engine with continuously variable valve timing and a three-stage variable intake system contributing towards outputs of 186bhp and 249Nm of torque. Its combined fuel consumption is 26.4mpg compared with 25.7 previously, despite considerably improved performance.

The chassis is all-new, too. There are revised MacPherson struts at the front, while Kia's compact and neat in-wheel multi-link suspension replaces a solid axle at the rear. And there are now disc brakes at all four corners, ventilated at the front.

Together with the reduced length, a wider track and much stiffer body, they give the new Sedona a tighter turning circle, sharper and more stable handling, a superior ride, reduced levels of noise, vibration and harshness in the cabin and improved stopping power.

The turning circle of the new Sedona has been considerably improved by reducing the turning radius by 89cms and is one of the best in class.

Kia also launches a world first, a variable rack stroke system. The advantage of this system is that it makes manoeuvring lighter and easier while at the same time creates space for snow chains by creating greater wheel clearance for the front arches.

The new Sedona enters a declining market with increased competition from improving rivals. Private buyers are gravitating towards compact seven-seat MPVs, like the new Kia Carens recently revealed at the Madrid Motor Show. But fleet sales are rising to help compensate and now account for 60% of all large MPV purchases.

Diesel sales are also increasing, so Kia will offer just one entry-level V6 petrol model, with a five-speed manual gearbox. Diesels made up 97% of sales of the old Sedona, and diesel automatics are an increasingly important sub-sector. Kia will therefore offer six diesel versions of the new Sedona, with five-speed manual or five-speed automatic transmissions. The automatic now incorporates Kia's Sports Mode sequential manual change feature.

Value for money continues to be a cornerstone of Kia's marketing philosophy, and residual values are expected to once again be among the highest in the large MPV sector. Kia also maintains its transparent pricing structure with the new Sedona. There is a £2000 premium for each trim upgrade and a £1500 charge to move from petrol to diesel, while automatic transmission on the diesel costs £1100.