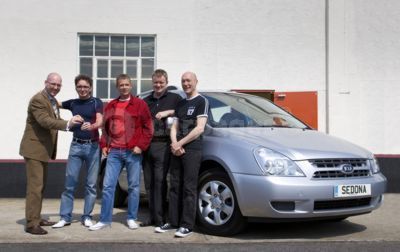 Two-thirds of the original line-up of The Jam have reformed for the first time in 25 years and the Kia Sedona is helping them spread across the country.

Bruce Foxton on bass and vocals and Rick Buckler on drums will tour the UK under the moniker of “From The Jam”.  The band are on the road for a sold-out 20-date May UK tour, their first since 1982.

Original members Bruce and Rick will be joined by Russell Hastings on vocals and guitar and Dave Moore on guitar and keyboards.  The keys to the Sedona were presented to them during a rehearsal in Woking, Surrey, where the Jam originally formed in 1975.

From The Jam chose the Sedona because it is a large MPV with the ability to eat up the miles in comfort with great gadgets to ease the time away.  Each of the five individual rear seats slides, folds, stores upright or comes out of the car altogether; providing them with a lot of space and versatility for guitars, drum sticks, microphones and cool shoes.  Even with the super-group on board, triple-zone air conditioning will make the cabin that bit cooler.  Whichever row they are sitting in, they will enjoy a great music performance from the on-board CD player with MP3 compatibility and iPod connection.

For anyone in the second and third row seats, they will get the best view of the roof mounted DVD player.  Infra-red headphones will mean they can watch and listen in comfort, whilst the iPod can still turn up to 11!

The reunion coincides with the band’s 30th anniversary when they signed to Polydor Records and released their debut album ‘In The City’, in 1977.  They sold over 14 million albums worldwide and had four number ones and 18 straight top 40 singles right up to their break up in 1982.

The three week tour kicked-off on the second May in Oxford and ends on the 27 May in Portsmouth.  As well as airing some timeless Jam classics, the band will be playing several new songs.  They are also in the process of recording new material that is due to be released in 2008.

The band will embark on their autumn tour on 24 November at Plymouth Pavilions.  The autumn tour will take in 20 UK dates including London, Southampton, Manchester, Birmingham, Newcastle, Sheffield and Glasgow.

Russell Hastings said: “It’s really great to know that we will be doing this tour around the UK in comfort.  Whilst we go from venue to venue rocking the masses, we will be kept entertained on the road with all the gadgets.  The Sedona is definitely a fantastic tour bus to keep From The Jam jammin’.”

The full model line-up, with prices, is:

For full gig dates and more information on From The Jam, please go to: www.thejam.org.uk