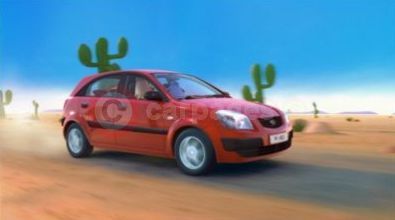 Kia’s award-winning animated advertising takes on a couple of new twists as the latest instalment hits the air on January 2nd.

Featuring the amazing-value new Rio, the latest Pete Fowler originated advert sees a dark character looking to bring about a sharp end to Kia’s animated family and also sees the introduction of ’stop-motion’ filming in the production.

Set in the American desert the axe-wielding, hockey mask clad gas-station owner looks forward to snaring the occupants of the approaching Rio as they will undoubtedly need to stop to re-fuel.

But thanks to the Rio diesel’s remarkable economy his murderous intentions are thwarted as the voice-over asks viewers to “think about” choosing a diesel-powered Rio for the price of a typical petrol-engined competitor.

The new commercial is created in “claymation” - plasticine models brought to life by stop motion animation - for the first time in a Kia advert and the whole process took three months to film just 30 seconds of footage. Previous Kia adverts have been created with computer-generated images and a live-action car; this time the Rio itself had to be computer generated and placed into the stop motion model environment.

Importantly, the new style avoids any possible sinister overtones in the Rio commercial, since the claymation characters are innately charming rather than menacing. By contrasting animation with a ‘real’ car it makes the car the hero of the commercial.

Behind the advert was Pete Fowler, one of the UK's best known illustrators, and the designer of the Kia family of characters. He has produced powerful advertising campaigns for many other major brands, as well as music campaigns, paintings, stage sets, shop interiors and his own ‘Monsterism’ range of toys and sculptures.

Passion Pictures is the animation company behind the Kia campaigns, and Mike Mort directed the Rio commercial at the famous Aardman Studios, Bristol.