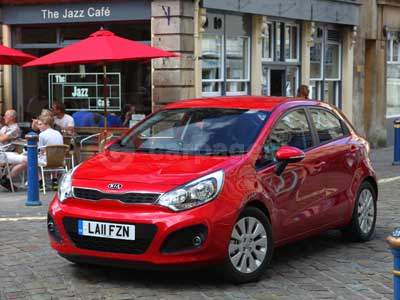 Managing director of Kia UK, Michael Cole, has said that the brand is set to strengthen with the introduction of the all new Kia Rio, which will debut at the 2011 Frankfurt Motor Show before going on sale in Britain on 1st September 2011.

The arrival of the Kia Rio follows the launch of the Picanto city car, providing a strong presence at the entry-level end of the market.

"Our cars are still value for money, but they now come with quality, style and technology,"Mr Cole said.

"There's more to come as well with the large Optima at the end of this year and the next generation cee'd in the C segment next year. This really is an exciting time for the brand."

Mr Cole added: "It's been a learning curve for our dealers as well. For example the old Picanto cost £6,100 - or just £4,100 when the government's scrappage scheme was in operation. The new model costs nearly £8,000 and while some eyebrows were raised among dealers, they soon realised that there has been a big leap forward in terms of the product we are offering - and the car is selling really well.

In 2010, sales totaled 56,000, which saw the benefit of the Scrappage Scheme during the first few months of the year. "If you look at pre-scrappage sales in 2008 we had just over 33,000 sales so that's a more interesting comparison.

"I can only see this improving further with full year sales of the Picanto and Rio in the A and B segments, the largest sectors of the market. One thing scrappage did do was get our cars onto peoples' shopping lists when perhaps they weren't in the past.

"We have not finalised plans for 2012 but directionally we should be looking to sell more than 60,000 cars with a full year of Picanto and Rio, along with Optima and the new generation cee'd."

Kia is aiming at having the newest product line up on offer in the UK by 2012, with the Kia Rio being available with two petrol and two diesel engines, which will include a 1.1 litre three cylinder turbodiesel offering lower fuel consumption and CO2 emissions than any other non-electric car on sale in the world, including hybrids and eco specials.

All new Kia Rio diesel models will include EcoDynamics technologies as standard, including a 1.4 litre model which will be added to range a short while after launch. The 1.4 litre diesel four cylinder engine develops 89bhp, 70mpg fuel consumption and 105g/km of CO2.