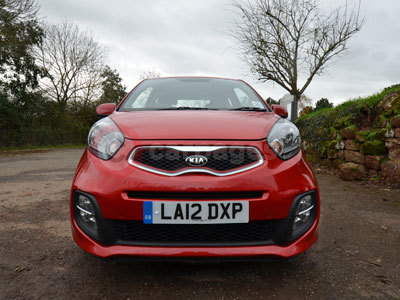 The second generation Picanto from the Korean car manufacturer Kia went on sale in the UK in June 2011.

We tested the first generation Kia Picanto in 2005 after its launch in 2004 and have previously road tested the second generation version in its five-door format.

The Picanto was designed by Kia’s European design studio based in Germany which is under the direction of Peter Schreyer who was behind Audi’s original TT and is responsible for the Picanto’s Tiger nose. The new Picanto is built at a joint-venture plant with Donghee Auto Company, at a factory in Seosan, a few kilometres from Kia’s Hwasung plant in South Korea.

We decided it was time to test the sporty looking 3-door Kia Picanto ‘City’ powered by 1.0 litre engine and priced at £10,245 on the road (when tested). The City model went on sale in the UK on the 1st October 2012.

There is a choice of two petrol engines, a 1.0-litre and 1.25-litre; currently there is not a diesel unit.

The three-cylinder 1.0-litre unit that we tested in the Picanto City develops 68bhp and 95Nm of torque coupled to a 5-speed manual gearbox.

There is also a more powerful 1.25-litre four-cylinder engine which is offered in three guises, all developing 84bhp and 121Nm of torque. In standard form it averages 60.1mpg. There is a four-speed automatic transmission, which averages 53.3mpg, the EcoDynamics model can achieve 65.7mpg (according to official figures), with its Intelligent Stop & Go (ISG) engine stop/start system.

Where the idea of a three-cylinder 1.0-litre engine might instil fear into some in potential owners, in our opinion that fear is unfounded. It is capable of 0-62 mph in 13.9 seconds, which is respectable around town - with a top speed of 95 mph.

We tested the Picanto City in Devon so there are plenty of hills and the only reservation is that with more than just the driver on board, you will notice the hills. However, if the 1.0 litre engine runs out of puff, all you have to do is change down a gear but don't expect to zip up hills. If you are left to your own devices, and especially around town the 84 bhp engine copes well, and in some situations it feels quite nippy.

If you own the previous model you will find the 1.0 litre engine has been improved - it is quicker and more frugal.

The official combined consumption is 67.3 mpg which of course is on the optimistic side; we achieved 43.4 mpg on our mixed test route.

In summary don't expect too much out of the 1.0 litre engine - it will cope but will struggle if you load the Picanto with four adults and their luggage.

This is a 7-year+ news article, from our Kia archive, which dates back to the year 2000.

If in doubt check with your local Kia dealer as car prices and technical data will have changed since 2013.