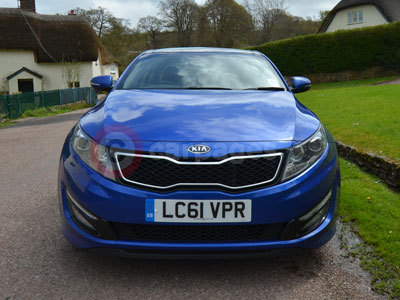 The Kia Optima went on sale in the UK on the 1st February 2012 priced from £19,595 and is Kia’s first car to be directly targeted at the business community.

The Kia Optima is ‘D’ segment car designed to compete with vehicles such as the Volkswagen Passat and Ford Mondeo. It was designed in Frankfurt and California under the supervision of Peter Schreyer, being first unveiled at the 2010 New York Auto Show.

Kia wants to make inroads into the lucrative UK fleet market and now that they have three new models they are hoping that the Optima will lead the way.

The Optima in the UK is only available with a 1.7 litre diesel engine, which on the face of it does not look that promising – but if you read on we were surprised.

Currently in the UK there is only one engine available for the Kia Optima line-up – a diesel 1.7 litre CRDi unit which produces 134bhp and delivers 325Nm of torque between 2,000-2,500 rpm. There is a choice of six-speed manual or six-speed automatic, on the two top specification models.

We tested the six-manual version of the Optima with Intelligent Stop & Go , which effectively shuts the engine down when at rest – you have to select neutral and lift your foot off the clutch and the engine will shut down – as soon as you select 1st gear it will re-start. Of course this is designed to save fuel in stop/start traffic but ultimately we found it a bit disconcerting, we also found changing gear a touch on the mechanical side, there needs to be better damping.

Whilst the idea of a 1.7 litre diesel engine does not inspire athleticism, on the road it feels more like a 2.0 litre.  Acceleration from 0-60mph takes 10.2 seconds for the manual version and 11.5 seconds with automatic transmission, while the respective top speeds are 125mph and 122mph.  It is relatively eager to please and even when cruising in sixth gear it pulls very well, even at motorway speeds. Like all turbo diesel units if you let the revs drop off then you can find yourself embarrassed but overall we were left impressed, although it is not the quietest of engines.

Official fuel consumption figures are 57.6mpg (manual) and 47.1 (automatic) – mixed touring averaged 44.1 mpg and motorway cruising we were just pushing over 50 mpg which is not too bad considering that our car was not fully run in.

Kia is quoting the CO2 emissions of 145 g/km for the diesel six-speed manual transmission version.

In summary the 1.7 diesel unit is impressive, although we would like to see more attention to sound deadening.

This is a 9-year+ news article, from our Kia archive, which dates back to the year 2000.

If in doubt check with your local Kia dealer as car prices and technical data will have changed since 2012.