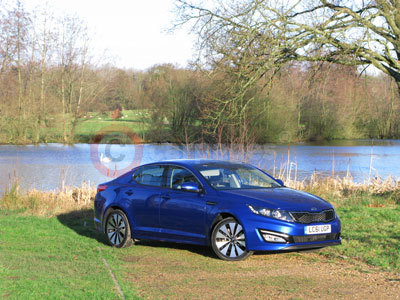 Korean car maker Kia has been undergoing a steady transformation. The Seoul-based company has upped its game considerably over the past few years in both the design and engineering quality of its products, and recent Kia models merit much greater respect than the cheap-and-cheerful cut-price Kias of the past. Now the newest addition to the range is a car that boldly seeks to woo sales away from rival manufacturers in one of the toughest areas of the car market: big family saloons, known in the motor industry as ‘D-segment’ cars.

It is not the first time that Kia has made a foray into this arena. The Kia Magentis targeted customers in the United States and was also sold here, but in very small numbers. It was a big saloon with a six-cylinder engine and bargain-priced, but British buyers seemed unconvinced and did not rate it as an alternative to much better-known and more respected rivals.

Undeterred, Kia is back with a new large saloon, the Optima. Once again it was designed to appeal to American customers, who have been buying it at a rate of 12,000 cars a month since it went on sale across the Atlantic in 2011. Now it is here, but with a difference. The US version of the Optima has a petrol motor, but for the UK it is available only as a diesel. The engine is a 1.7 litre, four-cylinder turbodiesel with a standard six-speed gearbox, or with an optional six-speed automatic. Prices start from £19,595 for the entry-level Optima 1 with a manual gearbox and rise to £25,995 for the best-equipped Optima 3 with automatic transmission.

At the heart of the Kia Optima is a 1,685 cc, four-cylinder diesel with standard stop-start technology to help boost fuel economy and tug down emissions. Although a 1.7 litre engine might sound a touch weedy to haul around a car this size, it certainly does not feel it. The power output is a respectable 134 bhp at 4,000 rpm, and the maximum torque is 240 lb ft peaking at 2,000 rpm. The Optima is a brisk performer with 0-62 mph acceleration in just over eight seconds, and a top speed of 126 mph. That is not at the expense of high fuel consumption, though, as the average mpg on official government test cycles is 57.6 mpg. The car’s CO2 emissions of 128 g/km put it in band D for the annual tax disc, and company car Benefit in kind tax liability is at 18 per cent.

This is a 9-year+ news article, from our Kia archive, which dates back to the year 2000.

If in doubt check with your local Kia dealer as car prices and technical data will have changed since 2012.