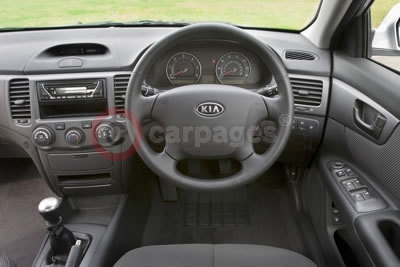 It has a larger wheelbase than before and, although it no longer shares its platform with the Hyundai Sonata, it does have the same under-pinning as the Carens. The new platform has brought about a change in the car's proportions, which also helps to improve the dynamics. Longer and taller, the new Magentis has a shorter front overhang making it look less bulky, while the front and rear track widths have been increased, adding to the stability of the car.

As usual, 'bigger' translates as more cabin space. The seats have larger bolsters and longer squabs offering more support. Apparently this is just for the UK because we tend to have higher cornering speeds on more twisty roads, than elsewhere.

At the rear of the cabin, there's ample shoulder room for three adults to sit in comfort and the legroom has increased by a minimum of 40mm, making it very spacious. Moreover, the rear passengers sit a little higher that those at the front, which adds to the airy feeling, despite the general darkness of the cabin.

The boot has increased, too. It can only be described as cavernous and is capable of swallowing 420-litres of luggage, bags and shopping. The rear seats have 60:40 split and fold function but they don't fold completely flat - unless I was doing something wrong. Annoyingly, the levers to release the seats are in the boot, which can only be opened from inside the car or via the key fob when the rest of the car is locked.

In the front, the passengers have also gained an extra 10mm of legroom and are faced with soft-touch surfaces and sensibly laid out instruments and controls. In the GS, there are black metal inserts in the dashboard - these are replaced by aluminium trim in the LS version.

For the driver of the GS, the steering column is rake-adjustable only and the height-adjustment for the driver's seat is manual. Choosing the LS adds rake-adjustment to the steering column and an 8-way, powered driver's seat. It also adds automatic headlights, full climate-control with an air quality monitoring system, in place of the standard air-conditioning and heated front seats.

Both trim levels have a leather-covered steering wheel, heated mirrors and a JVC, MP3 compatible radio/CD player with a removable front panel. It would be fair to say that it looks a bit dated although, it is amusing when the LED lights greet you with a 'HELLO' and display 'SEE YOU' when it is switched off. Satellite-Navigation is only available as a dealer-fit option.

Kia Magentis Images may not be UK specification cars. Colours and exterior and/or interior elements may differ from actual models.