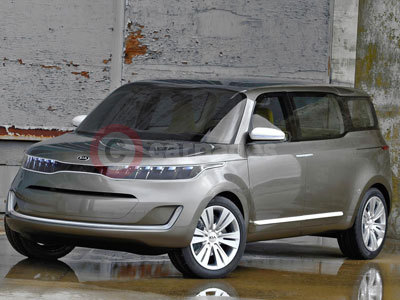 Kia Motors' design-led transformation has delivered eye-catching vehicles such as the Kia Soul, Kia Sorento and Kia Sportage that bear strong resemblances to the concept cars that preceded them, and today at the 2011 North American International Auto Show the brand's U.S. design studio unveiled its latest design statement - the Kia 'KV7' concept.

Conceived as a modern-day "activity MPV", the Kia KV7 was designed by Kia's California design team to challenge the notion that MPVs are strictly for family transportation. Kia KV7 reveals a vision for a vehicle with the functionality to transport a large number of people, and their belongings, while also serving as a connected social hub for groups of friends and adventure-seekers.

Inspiration for the Kia KV7 concept was found in the simplicity of elegant box shapes such as sleek smart phones and classic pieces of luggage.

The lounge-like interior is accessed by a striking passenger-side gullwing door which, when opened with the pillar-less front passenger door, provides extraordinarily convenient access. It also allows the vehicle to open up to the outside world and become the sociable hub of an outdoor event.

Paired with an A-pillar and windshield design that is less vertical than traditional MPVs, Kia KV7's wide stance and its smooth exterior skin and 20-inch wheels exude a modern appearance while projecting the confidence and strength of an SUV.

The Kia KV7 concept's inviting face is highlighted by an interpretation of Kia's signature bold tabbed grille with vertical LED headlamps integrated within the design to create a clean, smooth look. The Kia KV7 features several LED lighting elements that Kia's design team is evaluating for future production vehicles, including a continuous line of LED fog lights that span the entire front end of the vehicle and directional turn indicators on the outside mirrors and the rear of the vehicle that pulse in the direction being signalled.

Uninterrupted views of the passing scenery are provided by the concept's distinctive windshield, which follows the unique designs found on the new Kia Sportage crossover and Kia Optima saloon, and a series of near-continuous windows starting at the A-pillar.

Rather than being a predominantly functional vehicle to transport children and everyday paraphernalia the Kia KV7's interior has been envisioned to meet the needs of an entirely new group of consumers. This group are busy organizing road trips, social outings and new adventures for themselves and their friends to experience together.

As such, the Kia KV7 concept's interior employs four custom-built swivelling seats, including the driver's seat, and a rear-corner mini-lounge with seating for three and integrated storage compartments to promote interaction in an open social environment.

When the Kia KV7 concept's push button start is engaged, the entire front dash moves more than six inches toward the driver, bringing all controls within easy reach, including the large multi-use display which integrates infotainment, climate and navigation systems in one simple-to-use interface controlled by a trackball mouse mounted in the dash.

Rear passengers have their own, separate interface in the form of a floating tabletop touch-screen computer display. The Kia KV7 is Wi-Fi enabled, providing both the front and rear displays with internet capabilities and the ability for multiple passengers to connect their smart phones to the vehicle at one time and sign on to social networking sites.

The final element that separates the Kia KV7 concept from the rest of the MPV crowd can be found under the hood - the concept is powered by Kia's new Theta II 2.0-litre GDI turbocharged engine, as found in the new U.S. spec Kia Optima saloon. Capable of delivering up to 285 hp and mated to a six-speed automatic transmission it delivers V6-type power and performance while enhancing fuel efficiency.