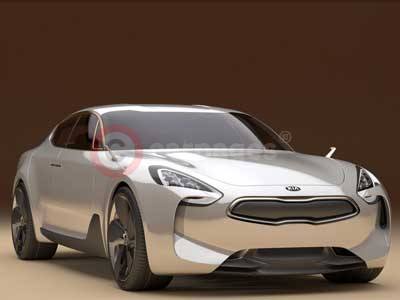 Work on the Kia GT concept started in November 2010 with the idea of Kia's first rear wheel drive being thought about by Kia's European designers for some time. "This concept allows us to explore exciting new design directions, as using a rear-drive layout creates very different proportions compared to a front-wheel drive car," says Peter Schreyer, Kia's Chief Design Officer. "The classic front-engined, rear-wheel drive layout of a performance saloon has distinct appeal not just for the domestic Korean audience, but also for the European and American markets."

"At the onset of this project," adds Gregory Guillaume, Kia's European Design Chief, "the design team was inspired by the spirit of iconic 1970s GT cars: sumptuous and elegant vehicles capable of whisking passengers from Paris to the South of France in effortless style and at high speed. We wanted to create something similarly graceful, athletic and confident, but not aggressive or overbearing."

Kia's colour and trim team visited the DMY International Design Festival Berlin, where copper was one of the stand-out materials of the show. As such a copper signature line runs from the base of the A-pillar and along the roofline to end ahead of the base of the rear windscreen. This is balanced by the grey paintwork of the Kia GT concept, with mica flakes to capture the light.

The central grille is framed with alloy and is joined by complex headlamp units which house six deeply recessed LED illuminators creating a distinctive nocturnal signature. The rear features a single sweeping wing-shaped tail light flowing around the cars flanks.

The front doors and rear doors - with rear hinges - open outward with a slight upward angle, described as having "an air of grace and confidence" by Schreyer.

The interior of the Kia GT concept is clean and uncluttered and offers a spacious and airy cabin with space for the driver and three passengers.

The proportions of the transmissions tunnel is deliberately emphasised in order to reinforce the power and performance of the concept.

The glass instrument panel of the Kia GT concept features three layers of organic LEDs providing three-dimensional depth and information which is displayed at the driver's command. Fingertip controls are mounted on a small, dished steering wheel so the driver can select what data is displayed.

The instrument panel floats above a muscular centre console. A red starter button and twist-and-go transmissions selector feature in a compact unit in order to free up space on the central transmissions tunnel. Two thin LED screens - mounted on the doors - display the view provided by the cigar-shaped rear cameras.

The top of the glasshouse features warm shades of copper creating a visual link with the metallic-treated leather of the cabin.