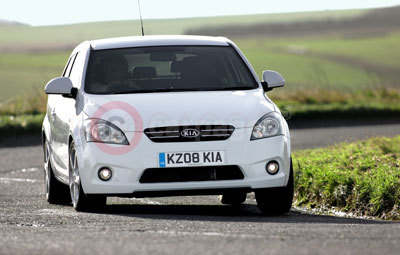 Production of the Kia cee’d at the Zilina factory in Slovakia has topped the 200,000 mark, just 18 months after the first car rolled off the line at the company’s brand new and environmentally-certified one-billion Euro facility.

Now producing all three cee’d family versions – five-door, SW and pro_cee’d – as well as European-only versions of the Sportage, Zilina is hitting the highest quality levels alongside production records.

This year, Zilina has set a string of new productivity records with 915 units made in a single day on Monday 21 April, 4,474 units in a single week starting 7 April and 19,300 units in one month - April.

‘This is another truly significant day for Kia,’ enthused Mr In-Kyu Bae, President and CEO Kia Motors Slovakia.  ‘We produced our 100,000th cee’d last September, only 10 months after start-up, and with the addition of the cee’d wagon and pro_cee’d three-door hatch we have reached our 200,000th cee’d after only eight more months.  We are proud to have achieved record productivity levels while maintaining excellent build quality.’

Mr Paul Willis, Chief Operating Officer (COO), Kia Motors Europe, added, “Since the Kia cee’d’s launch in Europe in December 2006 and the UK in February 2007, the cee’d family, with its choice of five-door, three-door and wagon body styles, plus attractive styling, high quality and 5-Star EuroNCAP safety standards, has played a significant role in winning over thousands of new consumers to the Kia brand.”

Last month, the Kia cee’d was honoured by TÜV which presented Kia with a DFE (Design for Environment) and a LCA (Life Cycle Assessment) environment certificate confirming that the design and manufacturing processes behind the successful Kia cee’d are indeed ‘environmentally-friendly’.  The Kia cee’d is the first Korean brand car to receive such recognition.

In December this year Zilina will start manufacturing cee’d vehicles with fuel-stretching and CO2-reducing technologies from Kia’s experimental eco_cee’d line-up, further underlining
the company’s strong and continuing drive to minimize its impact on the environment.

Kia Motors always claimed that its first-ever assembly facility in Europe would establish new benchmarks for vehicle quality and productivity, aiming to manufacture ‘100 cars per employee per year’ when fully operational and becoming the most productive car plant in Europe.  The 200,000th cee’d landmark is proof that Kia’s productivity ambitions for its plant in Slovakia are progressing strongly.