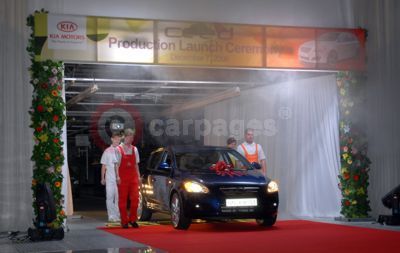 Europe's latest, most advanced and most efficient vehicle production facility has officially gone live as the first showroom ready Kia cee'd runs off the production line in Zilina, Slovakia.

Local worker, Andrea Jarasova is a final line specialist and she was happy to be at the ceremony: "We are all signing the car to commit to producing vehicles of the highest build quality possible.  This is a special day for us all at Zilina."

Jean-Charles Lievens added: "This is an historic day for Kia Motors.  The very first car in Kia history to be designed and built in Europe is ready.  Who would have thought that Kia would produce a car for Europe just a few years ago? This day is a milestone in our development and underlines our company slogan - 'the power to surprise'. Indeed, the first cee'ds have been sown!"

The new five-door Kia cee'd will go on sale in the UK on 1 February 2007.  Every model will come with a best-in-Europe seven-year, 100,000-mile warranty as standard.