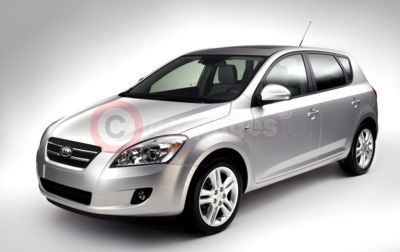 Kia Motors Corporation issued the first official photographs of its all-new family car - code named ‘ED’ - at the British International Motor Show in London today. Created especially for European consumers, the new model will be Kia’s strongest-ever contender for C-segment honours when it goes on sale across Europe in December 2006 - a genuine challenger to the established class leaders.

The 4.2-metre long ED has an unusually long wheelbase (2,650 mm) and will offer class-leading interior space, plus highly competitive levels of equipment and state-of-the-art active and passive safety. From launch, a range of four engines will be available, including 1.4, 1.6 and 2.0-litre CVVT gasoline engines and an all-new 1.6-litre VGT diesel engine.

"Our new C-segment model is code named ‘ED’ because it is a European Design created with European consumers in mind," explains Jean-Charles Lievens, Senior Vice President Kia Motors Europe. "Our ED production model’s styling highlights that this car is a truly European design, tailored precisely to the C-Segment which is uniquely important in Europe. ED is truly a car designed in Europe, manufactured in Europe, to be marketed exclusively in Europe, to fulfil 100% of European customers’ needs."

With its ‘tough not rough’ appearance, combining strongly solid forms with sensitively flowing lines, jewel-like detailing and a broad stance, ED points towards the future elements of Kia’s evolving design language - like the cee’d concept car shown by Kia at the Geneva Show earlier this year and at the British Show today.

Kia’s latest C-segment model, the ED will be produced at Kia’s first-ever European manufacturing facility at Zilina in Slovakia. It will be marketed exclusively in Europe and the five-door launch models will be joined by a range of station wagons and sporty three-door hatchback models from September and December 2007, respectively.

The all-new Kia five-door family hatchback will make its world premiere at the Mondial de L’Automobile in Paris, France, on 28 September 2006, when its name will be revealed.