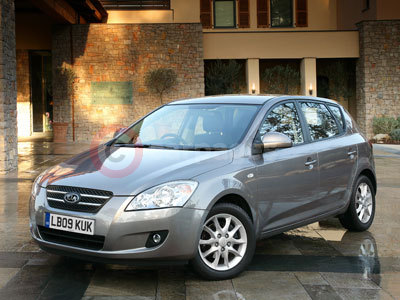 Kia Motors Ltd has been named Car Franchise of the Year by leading industry publication, Motor Trader, at its annual award ceremony in London.

The award - recognising Kia's 'remarkable achievement' in the tough conditions facing the UK motor industry completes a unique 'grand-slam' for the Korean brand coming hot on the heels of Autocar nominating the Hyundai-Kia group as Motor Manufacturer of the Year and AM magazine naming Kia as its Car Maker of the Year.

Motor Trader Editor Curtis Hutchinson said at the ceremony at London's Grosvenor House Hotel: "Judging Motor Trader's Car Franchise of the Year Award was particularly tough this year as all three shortlisted brands had excelled against the odds in 2008.

"The panel of judges reached a unanimous decision based on the remarkable turnaround led by Paul Philpott which has seen the brand improve sales and increase dealer profitability in one of the toughest years in the UK motor trade.

The award citation commented: "Kia has come a long way since the carmaker took over the distribution of its cars in 2002. Last year saw the brand grow sales by 6.65 per cent in a market which fell by 11 per cent. A remarkable achievement for a brand in a declining market.

"Sales in 2008 were achieved on the back of retail demand for its growing range of products which now include the European designed and built cee'd range which comes with an industry-leading seven year warranty package.

"The Motor Trader Awards judges were impressed by the turnaround staged at the company which they traced to the appointment of Paul Philpott as managing director in February 2007. His leadership skills, honed as commercial director of Toyota, and an influx of desirable new products were singled out by the judges as the catalyst for the brand's turnaround. Philpott has subsequently been promoted to the top position of Chief Operating Officer at Kia Motors Europe.

"With the brand no longer in the fast churn rental business its market share is approaching the two per cent mark, the network was profitable in 2008 and its standing amongst retailers in the Retail Motor Industry Federation's National Franchised Dealer Association Satisfaction Survey has leapt from 30 to joint number seven,"it continued.

Kia Motors (UK) Ltd. Managing Director Paul Philpott said: "We are absolutely delighted to receive this recognition for our effort to develop our partnership with our dealer network, to build our brand strength and to deliver growth during a very difficult period.

"A huge amount of effort and dedication has gone into this performance from every member of the Kia team and we have been magnificently supported by our colleagues in the network who have grasped the opportunity to build their success with ours. It is particularly gratifying to receive this recognition from Motor Trader on top of the awards from Autocar and AM - it is the icing on the cake!" he added.