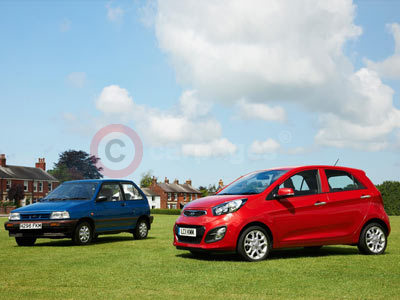 Today, 30th June 2011, Kia celebrates its 20th anniversary since its first car went on sale in the UK.

The Kia Pride was the only Kia model on sale in 1991 in the UK, with 1786 models sold in its debut year. In the following 20 years, Kia has seen a considerable increase in sales, with 2010 seeing Kia record 56114 vehicles sold, with over 2 million vehicles being sold worldwide.

2006 saw the appointment of Peter Schreyer as Chief Design Officer and a shift in direction for the brand, seeing design being focused on to appeal on an emotional level.

Commenting on Kia's 20th UK anniversary, Michael Cole, Managing Director, Kia Motors (UK) Limited, said: "Kia has been on quite a phenomenal journey in recent years. In less than two decades we've certainly lived up to our 'Power to Surprise' slogan by growing from a relatively small importer to challenging the best and most established brands in the industry."

"We think we have a fantastic range of cars and, judging by our growth over the last few years, it seems our customers think so too! 2011 is set to be our busiest year yet and I'm confident it'll be one where we challenge perceptions more than ever as we launch three superb new products in the UK - new Picanto, new Rio and, later in the year, new Kia Optima" added Cole.

On 25th May 2011, Kia Motors Corporation celebrated its 67th anniversary, originating with manufacturing bicycles in the 1950s, Kia has now grown to be part of the world's 4th largest automotive group.