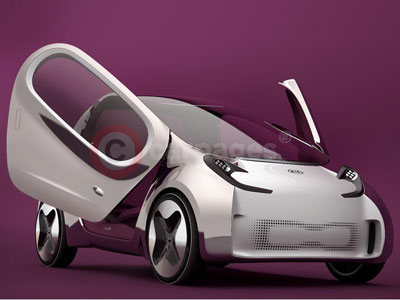 "A concept car like the POP could only have come from us," explains Gregory Guillaume. "Designers very rarely have the opportunity to start from a clean sheet of paper and it's great to be in a position to operate with such freedom."

In addition to the Kia POP, Kia will also be displaying a number of striking production models which reinforce the company's commitment to developing its design language - and putting this into practice with real-world models.

Chief among these will be the all-new Kia Optima D-segment contender. Sales in Western Europe will start in 2011.

Embodying what Peter Schreyer calls "a bold, athletic and visual sporting energy" that is carried through from the exterior to the car's involving driving dynamics, the new model is expected to significantly grow Kia's market share in the D-segment.

The stylish saloon is longer, lower, wider and has a longer wheelbase than any previous D-segment offering from Kia. It will be available in Europe with a host of high-technology features and with a choice of either a new 'U2' 1.7-litre VGT diesel engine (136 ps) or an all-new technically-advanced 'Nu' 2.0-litre CVVL (continuously variable valve lift) gasoline engine (170 ps).

The second of Kia's design-led production models at Paris will be the stunning new Kia Sportage compact SUV, which has received praise from media and public alike since launch. New Kia Sportage will soon be available with two additional engine options - both smaller capacity, fitted with fuel-stretching technology and mated exclusively to 2WD drivetrains and six-speed manual transmissions - to offer even greater efficiency.

Demonstrating Kia's ongoing commitment to minimising its vehicles' impact on the environment, the manufacturer's Paris stand will also feature a number of 'green' models. The three environmentally-focused vehicles - Kia cee'd and Venga low emissions models, and an innovative mild-hybrid Kia Sportage concept - have an average tailpipe CO2 figure of just 108 g/km and will be displayed in a distinct 'green zone' on the stand.