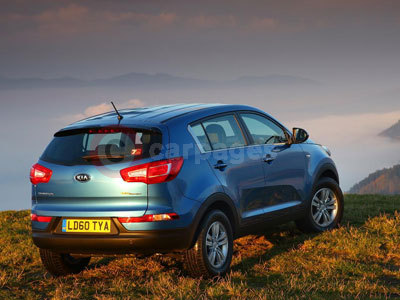 The newly-launched Kia Sportage crossover and Kia Sorento SUV have both walked away with wins in Total Off Road magazine's 2011 4x4 of the Year awards. Kia itself also scooped the '4x4 Manufacturer of the Year' award completing the hat-trick for the Korean firm.

The Kia Sportage won the category of 'Junior SUV' fending off competition from 18 mainstream and premium models including the Volkswagen Tiguan, Volvo XC60 and the Ford Kuga. The Kia Sorento came away with top prize in the SUV category, ahead of 12 rivals, and overcame strong opposition from luxury brands such as Range Rover and Lexus.

Alan Kidd, Editor, Total Off Road magazine commented: "Kia's won a string of value for money awards from us in the past, but the new Sportage and Sorento are about much more than just that. If money were no object, they'd still be really strong contenders - even the Sorento, in a category where it's up against some absurdly expensive rivals. Fact is, it's way more practical inside than many SUVs costing twice as much. And in the style-conscious junior SUV market, the Sportage's looks blow most of its premium opposition out of the water."

Explaining their decision to award Kia a third trophy Kidd added: "The fact that Kia has managed to introduce two such outstanding vehicles in the last 12 months, and do so at incredibly keen prices, makes it our Manufacturer of the Year, too: no contest."

Michael Cole, Managing Director, Kia Motors (UK) Limited said: "We've always been confident about the abilities of Sportage and Sorento and are delighted that these have been recognised by one of the UK's leading off-road magazines. Being chosen as Total Off Road's manufacturer of the year is the icing on the cake."

The full Kia Sportage line-up, including 2WD versions, went on sale in November priced from £16,645 and comes with a choice of two petrol and two turbo-diesel engines. Equipment levels are generous with even the entry-level version coming with features more usually associated with more expensive vehicles such as cruise control, Bluetooth & iPod connectivity and automatic rain-sensing wipers.

Kia Sorento is also available in 2WD and AWD versions and with either five or seven seat layouts. The powerful 2.2 CRDi turbo-diesel engine was recently joined by an efficient 2.0 CRDi engine and a new range-topping '3 Sat-Nav' version - with integrated touch-screen satellite navigation and a premium audio system - was also added to the line-up. The Kia Sorento range is priced from £22,495.